Home / About World Habitat / Who we are / Staff team / Louise Winterburn 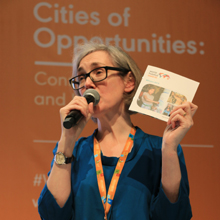 Louise joined World Habitat in July 2016 and is currently Deputy Chief Executive, with over 20 years’ experience in the community and enterprise sector.

Louise graduated with a Law Degree and spent four years working as a housing advisor and trainer for Shelter (a national housing and homelessness charity). In her voluntary time, she worked with other local residents to establish a community credit union (loans and saving co-operative) in her hometown and discovered a love of community enterprises. Moving to London, as a Credit Union Development Manager, she established a community credit union which now has nearly 8,000 members and has lent over £33 million to local people. She also completed a MSc in training and organisational development.

She has held a number of national roles which has enabled her to combine successful national policy-making with community-based work, including Policy Manager for Locality (a membership organisation of 600 community enterprises) and Director of a national campaign to change the UK benefit system and create community-based jobs for people who are long-term unemployed.