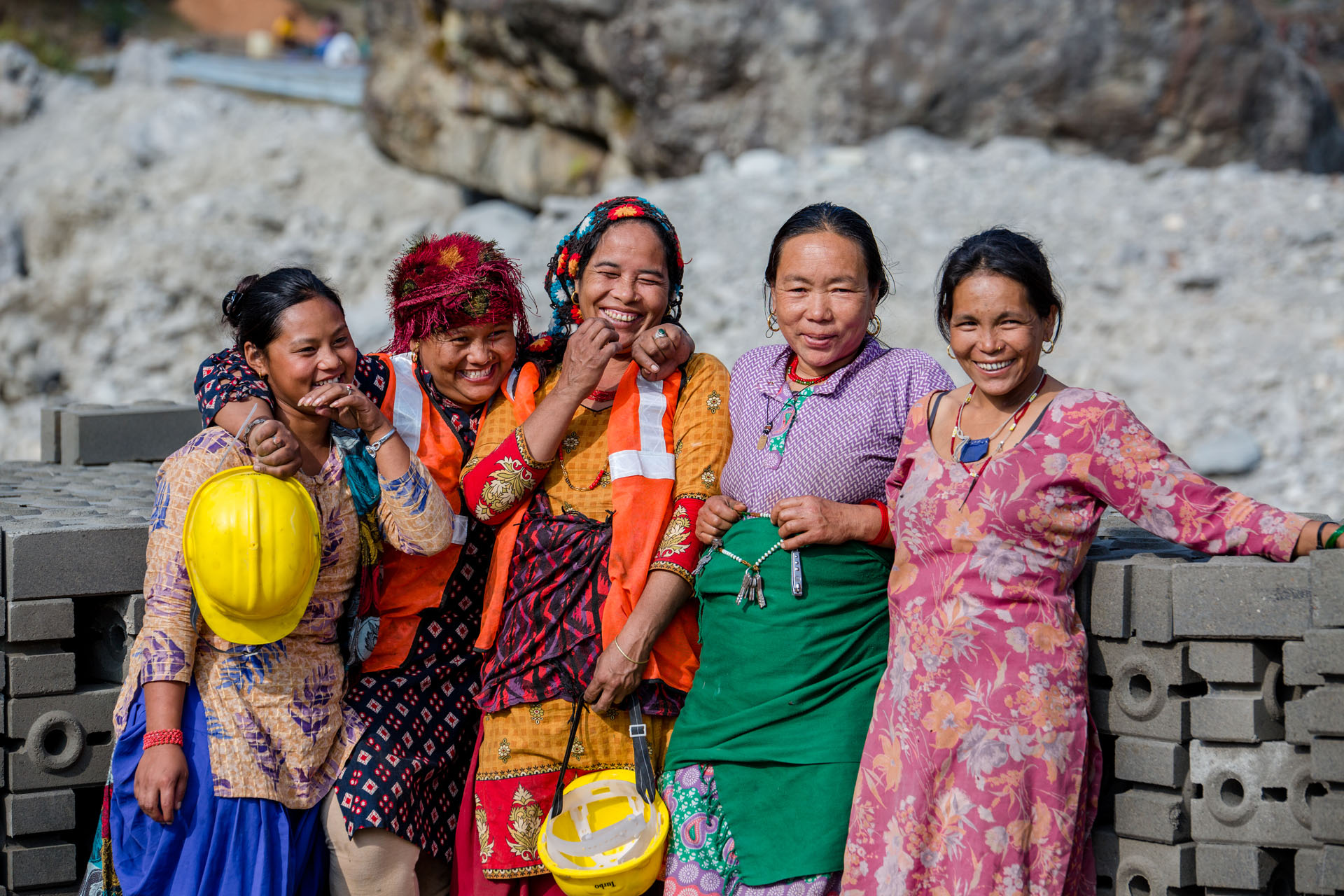 Last year was the 35th year of the World Habitat Awards competition which started in 1986. Every year between January and March projects submit their application, followed by a rigorous evaluation process to shortlist projects that demonstrate exceptional work in providing or promoting access to adequate housing. Between eight and twelve projects are finalists each year, of which two projects become Gold winners and the remaining either Silver or Bronze winners.

Where do the projects come from?

Over the last 35 years, there have been 363 finalists from 94 countries from all regions. Eight of them are considered “multi-country” finalists, as their 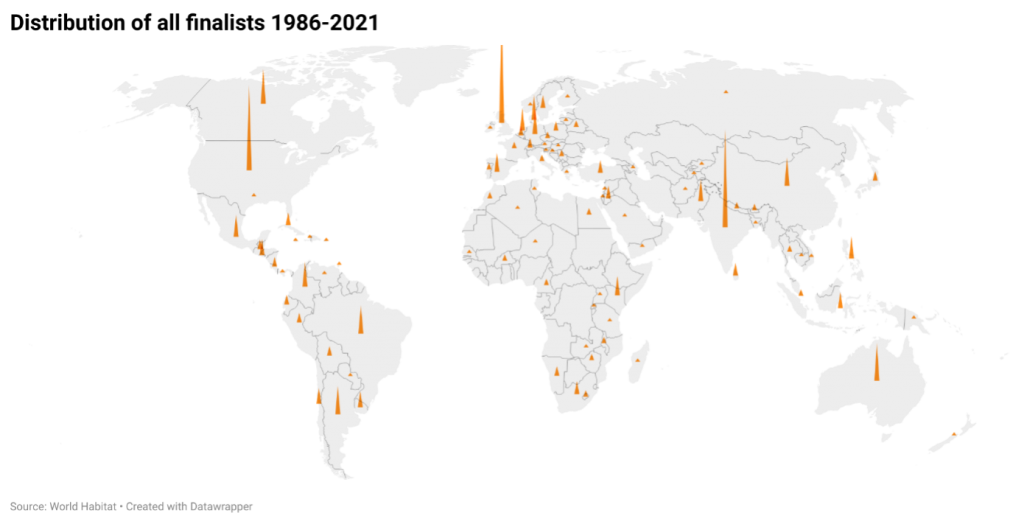 Since 1986, among the finalists, there have been 73 Gold winners from 39 countries and one multi-country. Countries with most Gold Winners are United States of America (8), United Kingdom (5), India (4), Pakistan (4), Australia (3), Germany (3), Japan (3) and then Brazil, Canada, China, Cuba, Egypt, Mexico, the Philippines, Sweden, and Switzerland with two Gold Winners each. 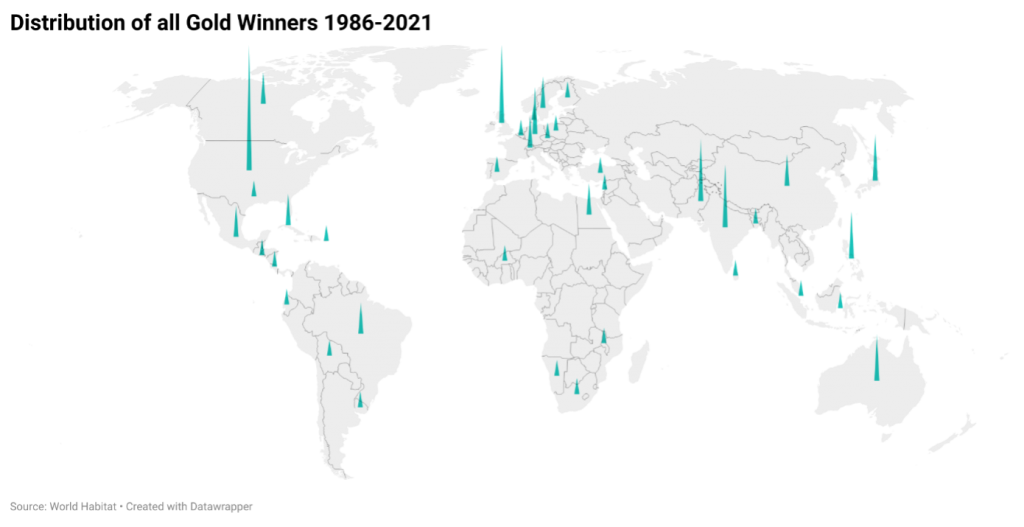 What type of organisations win?

Any type of organisation working in the field of housing can enter the competition. The below shows the distribution of organisation type among the finalists and Gold winners since 1976.

Around 25% of both the finalist and winners are local or national NGOs, charities, or foundations. The next most represented category is grassroot organisations and self-managed projects led by residents, followed by private sector (architecture firms, private housing developers). Other categories are international charities, foundations, and NGOs (which work in several countries), local and regional governments, national governments, academic stakeholders, and United Nations programmes.

What type of projects are recognised?

The following charts show the distribution of the finalist and Gold Winners by main project type. Even though some projects could enter in several categories, for the purpose of this classification a single category has been given to each of the 363 finalists and 73 Gold Winners.

The category with most finalists since 1976 is Community-Led Housing (66/363). This covers housing cooperatives and other self-help groups which build or refurbish homes for their members with technical assistance and sometimes public funding. Finalist projects of this category are mainly located in Europe (27) and Latin America & the Caribbean (19) and are generally led by grassroot organisations. Some of them are(20), projects created to gather people who share a vision of how they want to live together. However, there has been only one intentional community to win a Gold Award so far (East Lake Commons Conservation Community, Atlanta, USA (2001).

The second most represented category is Climate Change & Planet-Friendly Living. This includes nature-based solutions for construction and services, energy saving rehabilitations and other actions to reduce the environmental impact of the housing sector. These projects are often promoted by architecture firms & private sector (13), local and regional Governments (10) or local non-profit organisations (10). Half of these finalist are from Europe (23). [i]

It is followed by Informal settlement upgrading projects. These are mostly from Africa (14), Asia (13) and Latin America & the Caribbean (10) and are promoted by several type of organisations, including local charities (10), national Governments (7), local and regional Governments (6).

Projects from the Housing finance category include affordable funding and solidarity mechanisms for the access to housing. It is mostly promoted by local non-profit organisations (10), national Governments (6) and non-profit housing providers (6) from Latin America & the Caribbean (11), North America (8) and Asia (7). [ii]

The following type of finalists is Building materials and technology, generally implemented by local charities (11) and architecture firms & private sector (10), especially in Europe (8), Asia (7) and Latin America & the Caribbean (7). [iii]

The Rural self-help housing building or improvement category is mainly composed of projects by local or international NGOs working in Asia (16) and Latin America & the Caribbean (10).

Fighting Homelessness is also a common cause among the finalists from Europe and North America. These are mostly run by local charities (12) or non-profit housing provider (7).[iv]

Local and international charities from Asia (18) and Latin America & the Caribbean (7) are Upgrading and/or regeneration projects of homes or neighbourhoods are mostly led by Local and Regional (8) or national governments (5) from several regions.

Next most frequent category among finalists is Social inclusion which is diverse in the beneficiaries they provide housing or shelter to (war refugees, migrants, ethnic minorities, senior citizen, women facing domestic violence, people discriminated for their sexual orientation or disabilities. It is usually managed by non-profit housing providers (11), essentially in Europe (8) and North America (6). [v]

Last, but not least, there is a growing category of projects around Land rights (housing justice, right to the city, legal empowerment of tenants and informal settlement dwellers). This type of projects is led by local or international non-profit, and grassroots organisations in different regions.

15 hours ago 🏘️Are you interested in working directly with frontline & campaign organisations as well as stakeholders like UN-Ha… https://t.co/hv7KkDCpt8

15 hours ago Secretary General, @ulacav, Beatrix Pedro explains how for the past 28 years they have been ensuring university tra… https://t.co/3Kw0pK9bbh