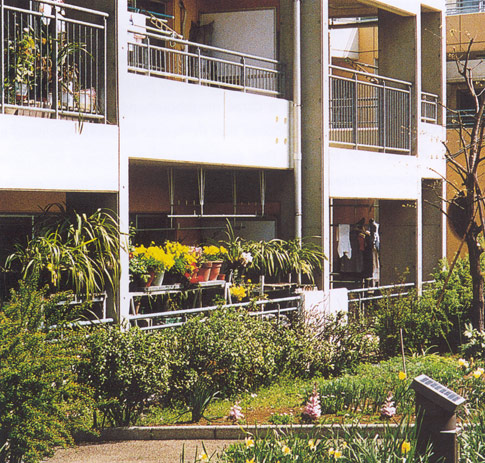 Completed in 1997, this housing project for 70 low-income households in Tokyo gives an example of how socially and environmentally sustainable housing can be developed in one of the most densely developed cities in the world. Environmentally sensitive design ensures that energy use is reduced significantly at the same time as comfort levels are increased. Social integration and community participation have been key elements of the project, resulting in a close-knit community of both older and younger age groups. Costs are no higher than for other public housing schemes and the project is spearheading debate in Japan on sustainable public housing. Similar schemes are now being developed throughout other cities in Japan.

To demonstrate how socially and environmentally sustainable housing can be developed in one of the most densely developed cities in the world.

International comparisons of green space in cities show that there are just 3 m2 in Tokyo, compared to 27 m2 in London and 29 m2 in New York. Japan’s urban greenery has been gobbled up by soaring land prices, short-sighted construction policies and punitive inheritance taxes. By 2015 it expected that Greater Tokyo will be the biggest megacity in the world with a population of 30 million. The city currently emits one per cent of the industrialised world’s output of CO2 and the heat island effect makes summer in the city a feat of endurance. Many houses built in the city are still demolished after only 25 years rather than reach their potential lifespan and this ‘scrap and build’ method is extremely wasteful of both energy and building materials.

In 1990, a group of professionals and private and public firms established the movement for environmentally symbiotic housing to encourage more sustainable housing practices. Symbiotic housing is a term used to describe housing developed in relation to the local and global environment. Energy and building resources are conserved as well as waste being reduced. Harmony is sought with the natural and man-made surroundings and residents are offered a healthy lifestyle and an opportunity to participate in creating and maintaining their living environment. The Fukasawa Symbiotic Housing Complex provides an excellent example of how sustainable housing solutions can significantly improve the quality of urban living environments, not only physically but also socially.

The Fukasawa Symbiotic Housing Complex was completed in 1997 and is a public housing scheme in the Setagaya Ward of Tokyo. It consists of five apartment buildings containing 70 dwelling units, 43 of which are for low income residents, 17 for older persons and 10 for middle income residents. 25 parking lots are provided for residents. Communal facilities include a day centre, a meeting hall, children’s playground, garden and flower beds and these are all available for use by people in the locality as well as the residents. The 7,388 m2 site is located in a highly urbanised area of Tokyo, where formerly small wooden public housing, much of it long since derelict, had stood amongst unpaved paths and gardens. Rather than rebuild the derelict site to the usual high-density designs of suburban Tokyo, an innovative housing complex was designed for the site by a team of architects (Ichiura Planners & Architects + IWAMURA Atelier JV) led by Professor Kazuo Iwamura of the Musashi Institute of Technology. His original and creative approach ensured that the urban oasis was preserved and that the remaining original residents living on the old site actively participated in the planning of the new complex. Sixteen of these nineteen original residents returned to live in the new apartments and have taken a leading role in forming the new community.

A three-stage design process was used. Firstly the natural and social environments of the site were determined and assessed in order to establish the concept and objectives to be respected by all stakeholders. The second stage identified the best way to achieve that concept from the ecological, technological, socio-cultural, aesthetic and economic viewpoints. The third stage involved the implementation on site, followed by construction management and inspection and post-occupancy investigations.

The major goals of sustainable construction were met within the limited cost framework of public housing. High levels of thermal insulation and a selection of energy and water saving equipment and appliances were used to reduce levels of usage. A solar collector provides sufficient energy for heating and hot water in the day centre and solar cells power the outdoor lamps and a public clock. Two small wind turbines circulate water in the brook. Water saving is achieved through the use of permeable pavement for all streets and parking lots. Rainwater is also collected in individual tanks for plant watering and in a 60 m3 rainwater reservoir under the buildings.

Health and comfort were important design priorities. The apartments are built with careful consideration given to sunlight and wind and they incorporate various passive lighting, heating and cooling methods. Each apartment opens to at least two, often three or four directions and the form of the complex was determined by the local wind patterns. The use of open alleys and light/wind voids are based on traditional building styles and enable natural ventilation and aeration. The building materials, finishing materials and facilities of the apartments were selected for their low impact on the health of the residents and the environment.

The integrated social mix of the residents is extremely unusual in Tokyo and is one of the outstanding elements of the complex. There is a range of incomes, ages and abilities. Some apartments are purpose built for wheel chair users and other for single elderly people. One unit is reserved for a ‘life support adviser’ employed by the Setagaya Ward to take care of her elderly neighbours. Spacious meeting rooms were incorporated into the plan as were areas where children could play close to home and these have helped to community integration. Now in its fifth year the housing complex has developed into close-knit community, which is unusual in Tokyo’s newer residential districts. A Residents’ Committee holds well-attended meetings and organises cleaning, recycling and gardening activities and each block has its own House Committee. One Sunday morning a month is set aside for communal cleaning. When a vacancy in one of the apartments arose, a lottery was held to select the new resident from the 4,500 qualifying applications received!

Great emphasis has been placed on retaining and enhancing the links with nature on the site. 17 mature trees were preserved as well as banks of earth where dwarf bamboos grew and 160 other smaller trees were relocated. A biotope garden was created and accommodates a variety of plants, birds and insects. The garden produces cool air in mid-summer within the complex, a much welcome relief in the humid and hot city environment. Green rooftops have been installed to contribute to the regional green networking pattern and to improve the urban thermal conditions. Intensive monitoring has shown that these ground surface conditions improve the micro-climate around the buildings and that the design of buffer zones between interior and exterior is a key issue in creating environmentally symbiotic housing. The complex is a local focus for environmental education and awareness and its footpaths are used by members of the neighbourhood who enjoy the site’s greenery and the comfortable micro-climate.

Continuing post-occupancy evaluations, both scientific and sociological seek to continually refine the design and method. Studies have shown that family households living in the complex consume 30 per cent less energy on average than similar households in Tokyo.

A comprehensive plan has been drawn up, highlighting the roles that the Setagaya Ward, the residents and visiting users of the public facilities have to play in maintaining and administering the housing complex. The end goals of this are a comfortable living environment, interrelationship with nature and the neighbours and vital habitat and community.

As with all post-war public housing in Japan, the complex has been built and totally financed from public sector funds. The total cost of construction, including all exterior works was £14.2 m. Of this, £9.3 m was the cost of the buildings. Total floor surface area for the housing units is 5,537 m2, with a further 595 m2 for the day centre and 69 m2 for the meeting room. The local Setagaya Ward received £6.3 m in subsidy from the Ministry of Construction and the Metropolitan Government of Tokyo. These costs are only slightly above Setagaya Ward average for public housing. All properties are rented at typical rent levels for the area. The lower income households pay Y60,000 ($487) per month for a 72 m2 apartment and those on middle incomes pay Y120,000 ($974) for 75m2. No apartments are owner-occupied. Rental of a parking space costs a further Y40,000 ($325) per month.

The Fukasawa Symbiotic Housing Complex has attracted substantial attention and debate, both nationally and internationally and is spearheading debate on the future of sustainable public housing in Japan. It demonstrates the values of smaller independent systems of water and energy supply and most notably the value of living together in a close neighbourhood. It is not only the actual complex but also the process that Professor Iwamura has used to develop it that is of interest. The application of the simple and basic principles demonstrated in this project will help to bring back a greater social and ecological balance to urban housing, both in Tokyo and far beyond.

2 hours ago The theme for this years annual gathering of cities is 'Working in Partnership with Muncipalities.… https://t.co/FbN2WanxvY

2 hours ago The annual gathering of cities is underway in #Barcelona as each of our End European Street Homelessness campaign p… https://t.co/9hxEz6Zsoi

2 hours ago RT @HomelessCharter: Delighted to be at the @WorldHabitat Annual Gathering in Barcelona. We are here to tackle our combined purpose to #En…