The Frank G. Mar Community Housing Project is a high-density mixed residential and commercial development in downtown Oakland, California. It gives an excellent example of how to contain urban sprawl and provides 199 affordable dwelling units, underground car-parking for 310 cars and 12,500 ft2 of commercial space, all located on a single plot only third of a hectare in size. High levels of energy efficiency have been designed into the project and cross subsidy from the commercial activities helps ensure affordable rents for low-income residents. 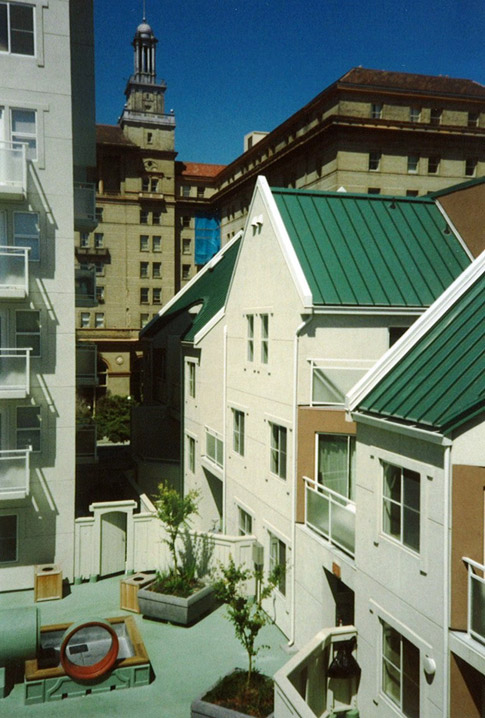 The Frank G. Mar Community Housing Project is situated in downtown Oakland, near San Francisco, California. It is a unique combination of affordable housing, street front commercial shops, public parking and a child care centre, all within a carefully designed urban centre. Oakland, otherwise known as Chinatown, has a strong Asian community and the project provides suitable accommodation for both elderly and young Asian families. The cornerstone of the project is the affordable housing component. Due to the large growth of the Asian community over the last few years, the existing housing stock within this urban neighbourhood has experienced tremendous pressure. Large three and four-bedroom units to accommodate the influx of large families were in particular demand, as were small one bedroom units for older residents who choose to live in the downtown area with its convenient access to shopping and services.

The project is a joint venture between two non-profit groups – the East Bay Asian Local Development Corporation (EBALDC) and the Bridge Housing Corporation of San Francisco. EBALDC is a community economic development organisation dedicated to the betterment of the East Bay community, particularly the low-income and Asian and Pacific Islander population, through the development of physical, human and economic assets for individuals and community organisations.

The EBALDC Property Management Staff manage the complex with a full-time on-site manager, management aide, custodian and maintenance supervisor. Over 350 residents live in the complex. The project was completed in 1990. It is situated on a single city block and comprises a nine storey block providing 65 one and two bedroom units, appropriate for the elderly and handicapped and a further 54 low-rise units designed for large low-income families. All low-rise units have a private outdoor space and separate access from the pedestrian ways off the central plaza. The large open courtyard or plaza in the centre of the project provides a safe environment for children to play. Laundry facilities and a large well-equipped community room are available for use by all tenants.

In addition to its main role of housing provision, the project also provides commercial units and car parking facilities that generate an income which is used to subsidise the housing costs, thus making it affordable to low-income households.

This project is located on a single city block and consists of a series of shops at ground level with residential units on a plaza above the shops. The two levels are separate, neither one intruding upon the other, yet they are interdependent in that the residents have services at their doorsteps and the shops have assured customers from the residents above as well as drawing on the surrounding neighbourhood. The shops include a pharmacy, restaurant, optometrist, accountant, boutique, gift shop, computer company and furniture store. Sixty-five of the residential units are in a nine-storey block on one side of the plaza, with the remaining 54 low-rise units arranged around the other three sides. The mid-rise tower houses most of the elderly residents and insulates them from noisy children. On the other hand, a child care centre operating within the complex gives the older people the opportunity to spend time watching or playing with the children.

The striking design and appearance of the project give life to the notion that subsidised housing has to be boring. It presents a vision of green pitched roofs and balconied towers, emphasised by the clean light grey, with contrasting earthen brown, stucco and the use of simple aluminium window frames. Recessed balconies are carved into the eave sides of the complex to create usable outdoor rooms for the upper floor apartments while creating visual interest for the overall appearance of the project.

On the residential level, the low-rise units are organised in groups of three to five units, clustered around a courtyard. This notion of a courtyard surrounded by perimeter buildings is very typical of Asian architecture. The residential level is accessed both from the street and the underground car park by a number of stairways and elevators strategically placed so that residents can reach their homes more or less directly. This arrangement is also crucial to security. The clusters are miniature neighbourhoods and the residents look out for each other. Windows in the units are deliberately positioned to facilitate surveillance of children at play and unwanted intruders. Planters placed in front of the dwelling units and a fountain help simulate the atmosphere of an Asian garden and offer refreshing greenery. Play equipment for children in the plaza area enables them to play in a safe and clean environment rather than on the streets of Oakland.

The dwelling units themselves are small but feel spacious due to the use of an open space plan. Each family unit has either a large balcony or a private patio. Apartments are supplied with window blinds, wall-to-wall carpet, tiled bathrooms and electric kitchens.

Among the most important design goals was the desire to provide affordability without sacrificing individuality and the human scale, factors which are often overlooked in urban housing projects.

Capital funding for the project came from a mixture of grants and commercial loans. The Oakland Redevelopment Agency provided a US$4 million deferred payment loan from tax increment funds; Housing and Urban Development (HUD) provided a Housing Development Action grant of US$5.5 million and a further grant of US$500,000 was received from the federal Department of Health and Human Services for the commercial portion. Wells Fargo Bank provided the construction financing and Citibank the permanent financing. The Federal Home Loan Bank of San Francisco recently granted a US$416,500 interest loan subsidy and a major investment was provided through the syndication of low-income tax credits. The project is valued at US$17 million.

The public parking part of the underground garage was sold back to the city of Oakland who needed to increase the amount of available parking spaces in the city. This sale helped to offset the costs of the project. Income from the commercial units is also used to help keep rents at affordable levels for the subsidised dwelling units.

The project is located on a prime downtown site and gives an outstanding example of what can be achieved within the rigid budget constraints of subsidised housing. Affordability has also been achieved using innovative cross subsidy schemes without any loss of individuality or by detracting from the human scale of the project. This practical, innovative and viable housing solution addresses the problems arising from the urban sprawl and traffic congestion associated with traditional American patterns of living and working. It also provides a model for urban community living, reintroducing traditional patterns of living and social interaction within the modern city setting. As such, it is in urgent need of replication both within the United States and beyond. Already similar projects are being undertaken elsewhere in the San Francisco area and beyond.

2 hours ago RT @xapsan: Definitely the highlight from @WUF_UNHabitat has been these special connections beautifully captured by @mattjpix at @habitatvi…

3 hours ago RT @mattjpix: Such a privilege to be part of the media team covering the #CoHabitatNetwork at the @habitatvillage at @WUF_UNHabitat this y…