A programme to build low-cost smokeless stoves is helping to improve women’s health and alleviate poverty in rural Pakistan, where four in every five households lack access to a clean, safe cooking resource.

Smoke from traditional open-flame wood-burning stoves can cause serious respiratory infections and eye problems, while food cooked on these floor-mounted stoves is easily contaminated leading to diarrhoea, especially in children.

The Chulah programme teaches marginalised women to build a hygienic, sustainable, smokeless earthen stove, which not only improves their health but also empowers them to earn a living by marketing and building stoves in other villages.

The programme is run by the Heritage Foundation of Pakistan, which has trained 35 ‘Barefoot Village Entrepreneurs’ (BVEs) in Chulah construction. BVEs act as master trainers, charging USD$2 to teach other women to build their own Chulahs out of mud bricks and lime. Materials cost an additional USD$6, bringing the total cost to USD$8.

Chulah stoves use 50 – 70 per cent less firewood than traditional stoves, reducing deforestation and saving valuable time for women, whose job it is to collect fuel.

Since 2014, more than 40,000 stoves have been built, improving the health of 300,000 people. The Heritage Foundation aims to expand the programme to build 100,000 Chulahs per year, bringing the health and economic benefits of the stoves to millions more disadvantaged women and their families.

Food preparation is an essential part of daily life but for women living in impoverished rural Pakistan it is a time-consuming and arduous task that puts both their own health and that of their family at risk. This is because millions of rural households depend on open-flame wood-burning stoves, which fill homes with smoke causing acute respiratory infections and eye problems. Food cooked on these floor-mounted stoves is easily contaminated with dirt – a major cause of diarrhoea, particularly among children.

Women suffer most, as they are the ones who cook for their families. In rural communities where there are high levels of poverty and illiteracy, women are very disadvantaged and restricted to the domestic sphere, looking after their family as well as livestock and crops. They spend hours each day collecting firewood for the stoves, which are inefficient and require large amounts of fuel.

In 2013, non-profit organisation the Heritage Foundation of Pakistan launched a programme to improve the lives of the estimated four in five rural women who lack access to a clean, safe cooking resource. The programme teaches women to build a hygienic, sustainable, smokeless earthen stove known as a ‘Chulah’, which not only improves their health but also empowers them to earn a living by marketing and building stoves in other villages.

The Chulah is a low-cost, fuel-efficient double stove on an elevated earthen platform. It is built from sun-dried mud bricks and strengthened with lime render. The design is Disaster Risk Reduction compliant, meaning it is more robust than traditional floor-mounted stoves, which are easily damaged by earthquakes or washed away by floodwater, leaving families without the ability to cook in emergency situations.

An air regulation pipe transfers heat from the first stove to the second, improving efficiency by making it possible to cook two pots from the same fire. When the fire is lit, the Chulah’s chimney emits smoke at a high level, eliminating the damaging pollution associated with traditional open-flame stoves. Better hygiene is promoted with the inclusion of handwashing facilities as well as storage space for cooking utensils.

Women construct the Chulahs themselves under the guidance of a Barefoot Village Entrepreneur (BVE) or ‘Stove Sister’. The Heritage Foundation initially trained 35 BVEs – mostly women with very low literacy levels who, after implementing the scheme in their own village, visit neighbouring communities to market the product. BVEs charge a fee of USD$2 to teach women to build a Chulah. This is paid in two instalments: half in advance and half once the stove is finished. This system helps with affordability and ensures the self-built stove is functioning properly as the BVE can check its performance once completed. BVEs also provide hygiene training to encourage handwashing prior to handling food.

The total cost of building a Chulah is low at around USD$8 and is paid for by the household. This includes the training fee, USD$3 for a bag of lime, and USD$3 for sand and gravel. Clay and earth is locally sourced and freely available and there are no labour costs because the women carry out the work themselves. It takes two days to build a Chulah and another two days to decorate one, making each stove a personal work of art.

Since 2014, more than 40,000 stoves have been built, mostly in villages in Lower Sindh, benefitting more than 300,000 people with improved health and better food. The popularity of the stoves has grown mainly via word-of-mouth recommendation. For example, friends and relatives who visit a home with a Chulah often express an interest in building one for themselves and BVEs take these opportunities to market the product and spread the technique.

The scheme has minimal running costs, aside from USD$5,000 spent on training the initial 35 BVEs, which was paid by the International Labour Organisation.

In spite of the Chulah’s clear health benefits, implementation of the programme has not been without its challenges. In conservative rural communities, men are not accustomed to women working independently and some women initially faced opposition from their male partners, until they learned that a BVE could earn substantial income. In some cases men have joined their wives in the venture, which has ultimately contributed to the success of the scheme. One BVE named Champa and her husband have helped others to build 20,000 stoves and earned USD$40,000.

The opportunity to earn money is not the only way the Chulah scheme is empowering marginalised women. The stove’s large raised platform achieves greater dignity for women by enabling them to cook and carry out other household tasks while standing rather than crouching on the floor. The stove improves cooking efficiency by around 25 per cent – saving valuable time – and can also become a focal point in the village, where women from neighbouring houses can meet and interact, strengthening social ties.

The Chulah also benefits the environment by reducing the use of firewood by 50 – 70 per cent. The use of agricultural waste, small twigs or sawdust bricks as fuel helps to prevent further deforestation and environmental degradation and also means women no longer need to spend excessive time collecting wood.

Since launching the programme, The Heritage Foundation has learned that many families use the Chulah to keep warm in the winter. The organisation recognises the potential benefit of this dual function for impoverished families and hopes to develop a new design that would better direct heat from the stove into rooms.

The Heritage Foundation believes the Chulah programme has an important role to play in the alleviation of rural poverty both in Pakistan and in other countries where the materials needed to construct the stoves are readily available.

It is working closely with the International Organisation for Migration (IOM) in the construction of 40,000 zero carbon shelters in Pakistan. Through this programme, Chulah training has been given to women in other parts of the country with mixed success.

In Upper Sindh, 100 teams of men and women were trained and 7,000 Chulahs have been built. In Shangla and Dera Ismael Khan, however, just 150 and 50 Chulahs have been constructed respectively. This is due to restrictions on women leaving their homes or villages, which has hampered marketing and training opportunities.

The Heritage Foundation remains committed to the programme and aims to build 100,000 Chulahs per year. The organisation is currently seeking funding to carry out large-scale training of new BVEs in different regions of Pakistan. This would enable the Chulah to be used in even the most remote corners of the country, providing a source of income, lowering living costs and improving the health of millions of marginalised women and their families. 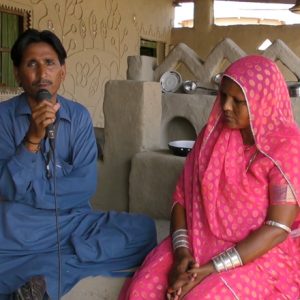 Champa was awarded “Woman Entrepreneur of the Year 2016” by Ladies Funds Pakistan for her success in bringing earthen chulahs to rural Sindh.

So far, my husband and I have helped to make 14,000 stoves. We work together and have been able to purchase a motorcycle and jewellery from the money we have made.

Now we are happy as we are able to live in comfort.

The ladies always ask about the benefit of the stoves. Since it is placed at a certain height, it does not cause harm to the children, not even toddlers.

It’s also safe for women. It prevents the smoke entering their eyes. It also avoids the heat reaching your face.

I teach them how to build the stove themselves. It makes us happy that they are also learning to build it and then teaching others.

Kanji is Champa’s husband. They live together in Mirpurkhas, Sindh.

People from Heritage Foundation of Pakistan came to our village and taught us how to make stoves. We made one of our own and then went on to make stoves in other villages.

We charge Rs. 200 (USD$2) to build a stove. Whenever we visit a village we first make a platform at a certain altitude. This platform is beneficial in case of damage caused by rain and floods. The stove helps in saving timber and it has a chimney alongside which guides the smoke upward. This stove also keeps the women safe. There is a separate storage space for utensils. Usually utensils are kept on the ground, uncovered, resulting in getting infected with insects & germs. That is why we urge people to make such elevated stoves.

We have developed our teams in every city. Approximately there are three to four teams in every village including Tando Ghulamali, Mirpurkhas & Jhuddo. They teach others how to make stoves and people learn from them.