This series of three blogs shows numbers and trends about the awarded projects over this period. Find the first blog (who wins?) here.

Each year dozens of projects apply for the competition, and the selection of finalists and winners depends largely on who else applied that year. Moreover, the competition always looks for innovation in the field of housing, meaning some good projects may not reach the final phase because they do not present something new to what has already been awarded in previous years. Furthermore, environmental, social and gender-equality standards have been rising over time, thus a project awarded 15 or 20 years ago may not reach the final phase today with the current expectations.

With this in mind, the following charts present distributions of finalists and Gold Winners over time, in order to observe changes and trends. They specifically look at organisation and project type. 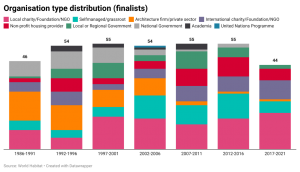 In the 1980’s and 1990’s, the number of National governments (grey) that were finalists and Gold Winners was high; however, in recent years it is almost non-existent. These government entities were primarily ministries in charge of housing and infrastructure from African and Asian countries, and, albeit less frequently, from Latin America & the Caribbean and other regions.

Following a similar trend, before 2006 there were many finalists and Gold Winners from Architecture firms & private sector companies (orange), but very few since then. Half of the finalists from these categories were from European countries.

In contrast, in the last three quinquennia, there has been a significant increase in finalist and Gold Winners from Non-profit housing providers (red). These are either public or non-governmental organisations that provide affordable housing solutions for low-income households or specific vulnerable populations. They almost exclusively from Europe and North America.

Perhaps given the rise of the internet and therefore easier access to information on the Awards, there has been an increase of finalists and winners from self-managed projects by grassroot and resident organisations (turquoise) since 2000.

In the last quinquennium specifically, the number of finalists that were local (pink) and/or international non-profit organisations (purple), such as charities, foundations, and NGOs, has risen significantly compared to the prior 30 years. They represent four out of ten Gold winners in the last five years.

Projects led by local and regional Governments (green), principally from Europe (14), Latin America & the Caribbean (6) and Asia (5), have regularly been finalists throughout with different types of projects.

As the following charts show, in each five-year period, there has been a great diversity in the types of projects being finalists and Winner of the competition. 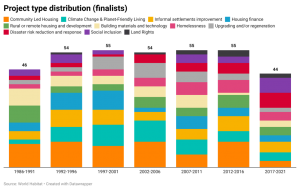 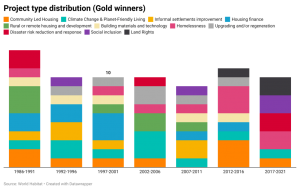 Among the finalists, there has always been an important representation of Community-Led Housing (orange) projects, which a strong participation of housing cooperatives and intentional communities from different regions. This participation has been lower in the last quinquennium. [i]

Climate Change & Planet-Friendly Living (turquoise) projects have also been present over time, but especially important in the competition in the 1990’s and early 2000’s and surprisingly low in recent years, despite the rising climate emergency. Possibly because of rising standards and expectations in this field. Logically, Disaster risk reduction and response projects have increased since the 2000 among finalists, with the increase of disasters and have even represented two out of ten finalists in the last five years. [ii]

Projects in the Social inclusion and Homelessness categories have increased their presence both among the finalists and the Gold winners over time. Five projects fighting homelessness have received the Gold award in the last 10 years.

Land rights is the other growing category among the Gold Winners with three gold awards over the last 10 years showing the important work to protect vulnerable populations in exposed to forced evictions and other violations of their fundamental rights.[iii]

Rural or remote housing and development [iv] and Informal settlement upgrading [v] are still unsolved challenges worldwide and have been represented in the competition since its inception, although there have been no Gold Winners from these categories in the last 10 years.

Finally Housing Finance, Building materials and technologies, as well as Upgrading and/or regeneration projects [vi] and have consistently reached the final stage of the competition throughout. Nevertheless, there have been no Gold winners from these categories in the last quinquennium.

The 2022-award results will challenge some of the statements above… stay informed about the winner announcement in January 2023 by signing up for our Newsletter and following us on Twitter, LinkedIn, Facebook, Instagram.