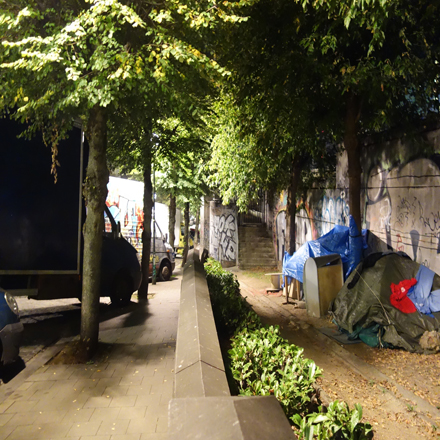 Campaign partner Arrels Fundació will be sharing a series of films of homeless people and their experiences in Barcelona. Arrels said, “It is possible to achieve our goal of a society where no-one sleeps on the streets, as long as we have political commitment and the necessary resources. World Homeless Day is fundamental for organisations, so they can share, echo and amplify the message to end street homelessness.”

A ‘celebration’ event in Leicester will highlight the stories of previously homeless people and stand in solidarity with those who’ve experienced homelessness across the world. Action Homeless, the lead campaign organisation in Leicester, said, “By highlighting the stories of people who’ve experienced homelessness in Leicester – as well as the work of all those involved in our local Ending Street Homelessness Campaign – we’re showing how people have built a new life away from the streets.”

In Bratislava, there will be a photo exhibition about people who are street homeless, for both local people and key stakeholders, to raise awareness in a city where homeless people are ‘invisible’. Organisers OZ STOPA Slovensko said, “Homelessness is the mirror of our failures. Many people close their eyes to homelessness. Some feel afraid, others depersonalise homeless people to something invisible.  World Homeless Day is about ending homelessness, which is possible. But it’s important that we act, not in one day, but every day.”

Pledges from volunteers in Brighton will highlight why they are getting involved in the local campaign, GalvaniseBH. They said, “World Homeless Day offers the opportunity to amplify our message that street homelessness has no place in our community. Every person sleeping rough has their own background, their own story and their own name. We will highlight some of these during our Connections Week, when community volunteers will talk to people sleeping on the streets about their hopes, fears and aspirations. We wouldn’t exist without our volunteers, so on World Homeless Day we’re sharing their reasons for getting involved and what they hope to achieve.”

Activity in other cities includes: