What has happened so far? Over the past ten years, street homelessness in Brussels has almost doubled. The 400 Toits-Daken campaign started with a mission to permanently house 400 homeless people.

Brussels launched their 400Roofs campaign in early 2017 and held their first Connections Week in June 2017.  Hundreds of volunteers met 528 people living on the streets and 299 people completed the survey. More than half (60%) of those on the streets had a chronic illness and almost two in every three (65%) had not had stable accommodation for over a year. Full results are available in this Connections Week report (in French) published in December 2017.

Following the Connections Week, they launched ‘Challenge Citoyen 2018’ – which involved volunteers working together to creatively find homes for people on the street.

In September 2018 a second Connections Week was held in the city with over 250 volunteers and field workers. Nearly 300 homeless people were interviewed. The full report is available here.

In August 2018 the 400 Toits-Daken campaign developed its modular housing project, which has now built four homes. The project is now run by Infirmiers De Rue and as it grew bigger, six modules were installed on a landfill in one of Brussel’s municipality.

In September 2020, a third Connections Week was held in the city with over 250 volunteers and field workers. Nearly 300 homeless people were interviewed. The full report is available here.

What’s next? Now that the 400Roofs campaign has ended, Infirmiers De Rue will be leading the Brussels campaign. The organization is active with teams on the streets, in housing for re-housed people and a team for research and creation of housing. In addition, it also develops awareness-raising and advocacy activities in order to arrive at structural solutions that will end homelessness in Brussels, Liege and elsewhere.

Infirmiers De Rue is recognized for its results and its efficient way of working in partnership with the different medico-social actors. 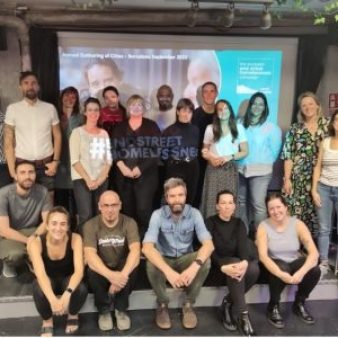