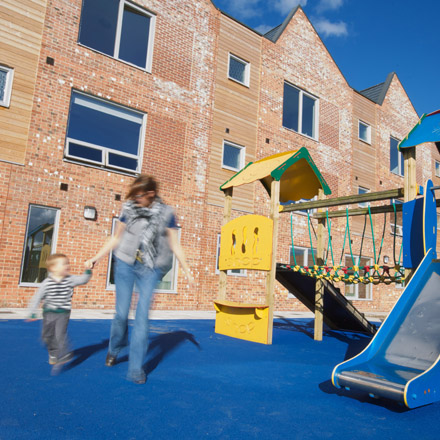 A ground-breaking partnership which has prevented thousands of people becoming homeless in a UK city facing reducing incomes and increasing poverty, has today been named a Gold Award Winner in this year’s World Habitat Awards.

The Homelessness prevention in Newcastle upon Tyne approach has prevented over 24,000 households from becoming homeless since 2014. Poverty and deprivation were already long-standing issues in the city before a decade-long programme of austerity reduced municipal budgets by almost a third and welfare spending was severely cut. Newcastle City Council developed its Active Inclusion Newcastle partnership approach to support residents to have a stable life, identifying and supporting people at risk of homelessness – before they reach crisis point, rather than responding afterwards.

More than 100 local organisations work together to prevent homelessness and promote financial inclusion. This involves addressing issues that can contribute to homelessness, such as debt and access to welfare support – to increase residents’ income and reduce their expenditure where possible. It has maintained extremely low and stable levels of homelessness in spite of a challenging background nationally.

Jacqui*, aged 52, was living in a private tenancy in serious disrepair, before being supported to deal with her debts and move to a social housing property closer to her family. She said: “I hadn’t had a cooker for two years, because when I first moved in there was a gas leak and they turned the cooker off. The landlord sent someone out to fix it but they didn’t do it properly. After that, the bedroom ceiling came in and then just before Christmas, we were sat watching telly and a big rat came walking across the sitting room.

“My job was to keep my grandson safe – I was getting more depressed by the day and knew I needed to get out of there. I thought, I’m going to be here forever, I’m going to die in this house. I hated it. I’d sit and cry every day.

“Once I’d applied for social housing, it took a few months of thinking it was going to happen, and then when it finally did, I couldn’t believe it – I said I wouldn’t believe it until I was inside the house! It’s just amazing. If it wasn’t for them [the Council] coming in and helping us, I’d still be sitting in exactly the same situation as I was. I feel happy, people say they haven’t seen me smile for so long. I was always so miserable all the time! Now I can just breathe, I’m not worrying all the time.”

Maimunah Mohd Sharif, UN-Habitat Executive Director, said: “UN-Habitat would like to commend Homelessness prevention in Newcastle-upon-Tyne for its comprehensive, city-wide, multi-agency, and data-informed approach to prevent homelessness. COVID-19 has particularly underlined the crucial need to strengthen resiliency and promote more inclusive and just societies. Reducing urban inequalities is a cornerstone to ensure we are all better prepared for future shocks and crises.”

Leilani Farha, Global Director of The Shift, former UN Special Rapporteur on the right to adequate housing and one of the final judges, said: “I congratulate the incredible coalition, led by the City Council, that has been created in Newcastle upon Tyne to ensure the success of the Homelessness Prevention programme. The programme shows that the City Council not only understands that homelessness is a human rights concern that must be addressed urgently, but it also demonstrates that preventing homelessness is the only way to truly solve it. Now, more than ever, the success of Newcastle upon Tyne must be celebrated, and the lessons learned there must be shared with cities across the world, the majority of whom are facing the same urgent and bourgeoning human rights crisis.”

David Ireland, Chief Executive of World Habitat, said: “Prevention is always better than a cure. But it often goes unnoticed and undervalued. This remarkable long-running project in Newcastle is so special because it has taken a whole city approach to preventing homelessness. They’ve not just thought about people’s housing but considered all of the aspects that make people vulnerable to homelessness.

“By using all the Council’s services and those of their partner organisations, they are able to identify people who are at risk – sometimes before they even know it themselves – and take preventative action. They have initiated this themselves and at a time when resources have been severely reduced. This is a real testament of a local authority doing the very best of what a local authority is there to do – to protect its most vulnerable citizens.”

The World Habitat Awards judging panel said: “This is a really impressive project, especially when you consider the deprivation locally and the cuts they have faced. It highlights local political commitment and leadership to continue to take an active and thorough approach – while working with other agencies – to prevent homelessness. There are things that others can learn from this project, in particular linking housing, homelessness, the voluntary sector, social care and welfare – there’s no way you can end homelessness unless you make those links.”

* Name has been changed.