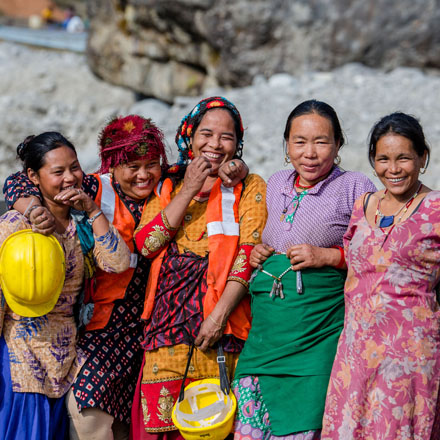 A project enabling local entrepreneurs to build eco-friendly homes in communities affected by disasters in Nepal, while also creating sustainable micro-enterprises, has today been named a Silver Award Winner in this year’s World Habitat Awards.

Set up by Nepalese non-profit social purpose organisation Community Impact Nepal (CIN), the project has reached all 31 districts of central Nepal affected by major earthquakes in 2015. To date, over 3,500 houses have been built, housing 17,500 people, while 200 micro-enterprises have been established and 2,200 jobs created. The project has also made an important contribution to gender and social inclusion, by encouraging the participation of women and marginalised groups.

Resident Shanti trained to build her own home in Majhigaun village. She said: “It was the most difficult work I ever did in my life but it was satisfying to feel that I was capable to make my own bricks and build my house by myself. The time we installed the roof and painted the last corners I felt so satisfied. I was happy that I built the house by my own hands. After living under tarps for several years it was now so nice to have a comfortable home.

“Seeing our house turned into rubble, living under a tarp, building my own house and now living in it, has been a story of hardship but also joy. I am proud that I had the strength and guts to attempt it and was able to build a home for my family.”

David Ireland, Chief Executive of World Habitat, said: “Earth has been used as a building material since the dawn of civilisation. Its abundant, cheap, green and is far safer for the occupants in the event of an earthquake. But with the advent of modern materials like concrete and steel it has become unfashionable in countries like Nepal. This project has been able to challenge people’s views by making interlocking earth blocks, that enable people to build modern looking houses with all the benefits of traditional mud construction. What’s fantastic about this project is how it’s encouraged and nurtured micro-enterprises to use earth-blocks and to innovate. The result is a more vibrant local economy, using more environmentally sustainable building materials.”

The World Habitat Awards judging panel said: “This project started as a disaster relief project but it’s moved on to do more than that. It brings CSEB technology into a very difficult area and it seems to do everything right – on gender, social inclusion, low CO2, locally-accepted technology, affordability and encouraging local investment. The move from disaster relief to permanent housing has been done in an organic, incremental and sustainable way. Not many organisations are managing change that well.”