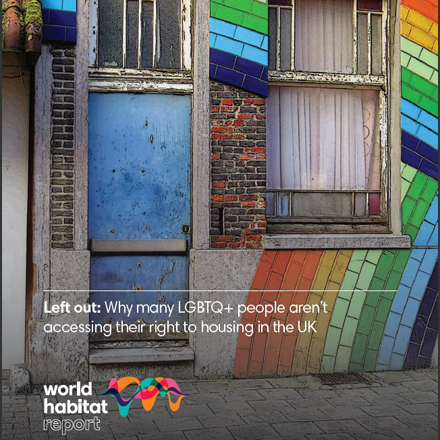 A few years ago my sister was telling me that she was keen to volunteer for the Albert Kennedy Trust (AKT) – a charity that supports LGBTQ+ young people experiencing homelessness or living in hostile environments. The timing of this was quite interesting, as in those days I was looking for an appropriate moment to come out to her (I saw this as a bit of a sign – I would be one of those lucky people that do actually get accepted by their families).

The mission of the organisation did strike me and got me thinking: I’d been in the housing and urban sector for a few years by then, learning from housing initiatives worldwide… and yet I’d never come across LGBTQ+ housing issues. As a member of the LGBTQ+ community, I was driven to find out more. I first went to the AKT website. The data and evidence I found there was shocking: a quarter of young homeless people identify as LGBTQ+, three-quarters of them feeling like their identity was the main cause of their homelessness. And 84 percent of LGBTQ+ organisations stated that they have experience of service users being vulnerable to homelessness… what was going on?

For me, this was quite a reality check, both from a personal and professional level. Personally, I was reminded of the disparities within the LGBTQ+ community. It highlighted how social acceptance by important people around you, coupled with relative economic stability and other privileges, could really be the difference between having a roof over your head or not. If most LGBTQ+ people we know fall into this more comfortable category, we might be blind to what the wider community is going through.

Professionally, it left me feeling that either I’d been living under a rock and just had missed this as a major topic, or… it was not being talked about – despite the gravity of the hardship faced by LGBTQ+ people with different housing issues. Several conversations with other housing experts confirmed my suspicion that there was a lack of overall awareness, both in the UK and abroad.

In 2016 we were very lucky to have Stonewall Housing participating in our World Habitat Awards. They are the main specialist LGBTQ+ housing advice and support provider in England, and their valuable work with vulnerable LGBTQ+ people lacking access to decent housing led them to be successfully selected as finalists of the Awards. This opened up further conversations, and really drove staff members at World Habitat to look closer at the issue.

This is what motivated the creation of our newest report – Left Out: Why many LGBTQ+ people aren’t accessing their right to housing. This report aimed to collect evidence of a wide range of housing difficulties faced by LGBTQ+ people – pointing towards systematic bias against LGBTQ+ people in both the housing sector and wider society – which in turn impacts one’s housing opportunities. To my knowledge, existing research by academia or the charitable sector had done great work to create evidence on specific housing issues for LGBTQ+ people, such as those faced by older people, or victims of domestic abuse, or refugees, etc. I aimed to contribute to this by collating evidence to create an overall picture of LGBTQ+ issues across the board.

This work embarked me on a difficult journey, as the evidence and testimonies point to extremely difficult stories: from kids kicked out of home and falling into exploitative relationships to keep a roof over their heads, to refugees being subject to violent abuse in supported housing, to elderly women being harassed out of their house by their neighbours. Nobody should have to go through these experiences. But they are happening around us. We need to stop being oblivious to this and start acting fast.

Based on the findings of the report, along with conversations with those that have been working hard on improving the situation it seems that there needs to be a recognition of a pathway of support that:

1) protects LGBTQ+ people from falling out of the housing system in the first place, e.g. social housing [1] and supported housing that is aware and responsive to the challenges faced by LGBTQ+ people;

2) provides a ‘safety net’ for those that have lost their housing, e.g. specialist or inclusive homelessness services, refuges for victims of abuse and for asylum seekers/refugees, and;

3) builds routes back into safe housing for those that ended up in the ‘safety net’, e.g. help in transitioning out of supported housing, housing first approaches, etc.

We can only achieve this if we are ready to look beyond the assumption that better LGBTQ+ right-focused legislation has solved all problems and saved the day. Housing organisations need to understand that being passively ok with LGBTQ+ people is nowhere near enough to secure safe homes. In fact, taking proactive action isn’t just a nice thing to do to improve diversity standards. For some LGBTQ+ people, it can literally make the difference between homelessness or safety. And in certain cases, life and death.

We hope this report can guide the housing sector and wider society to understand a community that has been left out of current narratives and solutions. Once again, we are reminded that we are far from achieving the Right to Housing for all, but also that we can have a part in helping to achieve this.

[1] Useful Resource: No Place like Home? Exploring the concerns, preferences and experiences of LGBT*Q social housing residents, HouseProud and University of Surrey.