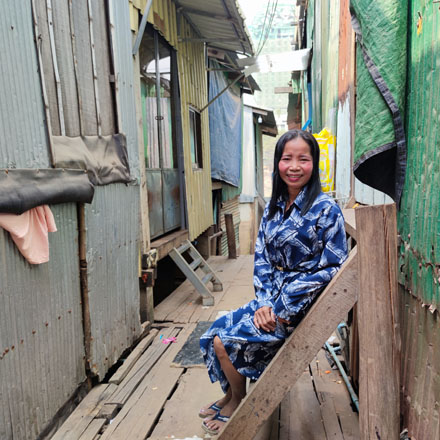 Kosal Phat is a Cambodian woman, leader of the Daeum Chan community, a poor urban settlement on the banks of the Bassac river in the south of Phnom Penh. She is a home-based food vendor widow who lives with seven other members of her family and who has to deal with an unfavourable social and economic context. The community she lives in is composed of 665 households including 98 female-headed families, made mostly of unsafe shelters and exposed to climatic hazards (flooding, fires and strong winds). Kosal is very concerned by the life of her community and puts herself at the service of the most vulnerable in every circumstance. Involvement in the Habitat and living conditions improvement in poor communities in Phnom Penh (HaLI) project takes different forms but is mainly symbolised by its status as a FDV (Family Development Volunteer) and PASSA (Participatory Approach for Safe Shelter Awareness) member. The project takes a holistic approach to the improvement of living conditions in the precarious neighbourhoods of the city.

Beyond the habitat, the project addresses the root causes that affect the populations of these settlements. With its vocation to intervene on four levels – the couple, the family, the community and the ecosystem – the gender issue became naturally a major and inerrant challenge to reach the most fragile households. The participatory methodologies deployed allowed a strong women’s involvement both within their household and their community. To prevent and fight against gender inequalities, HaLI social workers from the local partner NGO – Samatapheap Khnom Organization (SKO) – provided intensive counselling to women experiencing, or those at risk of, domestic violence, and also provided financial literacy training to indirectly address gender issues. This complementary approach allows us to talk about subjects that could previously have been taboo and develop a stronger solidarity.

As Kosal mentioned: “Women’s situation here is very tricky, most men are busy working far from home and often get drunk in the evening. Women have to take care of the children and have the duty to do house chores alone. In this condition, they need to find a part-time job near to their home. It is also why they are more available and interested to take more responsibilities in the community.”

Indeed, while men are difficult to mobilise, women are more interested in the organisation of their communities. For instance, PASSA meetings have a positive impact on the self-confidence and social status of women.

The activities proposed within the framework of the HaLI project strengthen solidarity and mutual aid between members of the community, especially women. Kosal is very proud to play such an important role in the resolution of the community’s issues by meeting and gathering people. As community leader, she receives many complaints from dwellers about the difficult situation they face, but in many cases, there is nothing she can do alone. The challenge for her is to go further and mobilise them to solve issues together at a community scale:

“Thanks to the support of HaLI mobiliser officers in Daeum Chan, members start to see beyond their own interest and care more about the community. I like to see members discuss together and agree on the priorities for the community. Currently, decisions are made jointly about the infrastructure improvement we want to advocate for in front of the local authorities.”

Given that four in every five (80%) of PASSA members are women, it offers a new position in the decision-making process inside the community that allows women to be strong enough to cope with situations of discrimination. Kosal’s pride is to see her community live in better conditions and women treated equally and empowered in leadership:

“I consider myself as a role model and encourage everyday women of the community to face the discrimination, fight the criticism and be brave.”

She believes that it is through good solidarity between members that they will succeed to get strong houses, fully equipped settlements, better infrastructures and a new balance with less stereotyped gender roles within households. Capacity building participates in the rebalancing of forces within the household and increases women’s bargaining power. As a result, women are less confronted with domestic violence and find more and more jobs by increasing their self-confidence.

Kosal is optimistic but is also aware of the road ahead and intends to continue the efforts begun with PE&D:

“As a woman, you need to fight against the criticisms, prejudices and social norms. We should share the house chores with men, be able to wear what we want and go out at night if we want. This requires a mental strengthening but also a supportive environment. Here, it is difficult to avoid those inappropriate remarks but it is important to not accept [them] and never give up.”