While Cambodia’s economy is one of the fastest growing in the world, the country remains among the least developed. Poverty is widespread, with nearly 300 informal settlements in the capital, Phnom Penh. These often consist of precarious, makeshift housing, lack of land security and services, high unemployment and poor sanitation.

Working with local partners, NGOs and local authorities, the project involves eight large informal settlements, home to around 10,000 people. Priority is given to vulnerable families living in particularly unsafe housing, with a strong focus on women who are experiencing, or at risk of, domestic violence.

To date, the project has improved 88 homes to become structurally safe, trained 297 people (including 190 women) in sustainable construction techniques, provided social support to 206 families, including domestic violence-related support, and trained 152 people (124 women) in PASSA (Participatory Approach for Safe Shelter Awareness) – a participatory method of disaster risk reduction related to shelter safety. Training has also been provided in financial education and gender issues (to 140 people, including 100 women), savings and credit groups (34 women) and family support (58 people, 50 of them women).

Cambodia has one of the fastest-growing economies in the world, driven largely by the garment industry and tourism. Its capital city, Phnom Penh, has experienced rapid population growth over the last 20 years – from 560,000 in 1998 to more than two million in 2019 – thanks largely to mass rural-urban migration. Nevertheless, the country remains among the world’s least-developed countries, with a third of the population living in poverty and a further one-in-five (20%) classed as ‘near-poor’.

This is, in part, the legacy of the Khmer Rouge, which, in 1975, drove residents of Phnom Penh into the countryside and killed as many as two million people in the years that followed. When the regime fell in 1979, people began to move back to the capital. However, with ownership of property abolished, the first people to occupy a vacant property became its new owners, leading to the development of informal settlements on government land not intended to be lived on. The number of informal settlements has continued to rise, as climate change forces rural families to move to the city in search of work.

The development of the settlements has been poorly controlled. Many are vulnerable to flooding and building collapse or are in areas severely affected by drought, fire, storm or erosion. Their presence, largely on state-owned land, is tolerated but not legalised.

As a result, upgrading or investment is problematic. This combination of factors means residents experience lower incomes, less food and a lack of drinking water, more debt, child trafficking and labour, drug use and domestic violence. The latter is a particular challenge in Cambodia, where domestic violence is often regarded as a ‘private’ matter, and there is little support available.

It was in the context of these challenges that Planète Enfants & Développment (PE&D) launched its project Habitat and living conditions improvement in poor communities in Phnom Penh in 2018, building on past collaboration with local partner Samatapheap Khnom Organization (SKO). The project, which is funded by the Abbé Pierre Foundation and the French Development Agency, aims to support residents in informal settlements by improving precarious, often dangerous, homes, developing community organisation and action, and delivering family support and training, including on domestic and gender-related violence.

PE&D works closely with local NGOs and the city government, meeting local authorities at least every six months. By developing relationships with local authorities and supporting resident groups, often through partnership working with local organisations, the project strengthens communities’ capacity to improve their living conditions, while also pushing for land rights and calling on the government to recognise the right to housing. In a context where land rights complications make it difficult to upgrade housing, the project provides residents with access to finance to carry out home improvements. It also addresses issues of gender-based violence and inequalities, themes in which PE&D specialises.

The project was piloted in four of the largest informal neighbourhoods in Phnom Penh, and scaled up to four further districts after a positive evaluation. Habitat for Humanity Cambodia was initially responsible for carrying out habitat assessments and monitoring sites during the pilot project. They also trained the field team, which consists entirely of local people, in PASSA (Participatory Approach for Safe Shelter Awareness) – a participatory method of disaster risk reduction related to shelter safety – and assisted in the first renovations. Since then, PE&D has taken full ownership of the project, and in summer 2019 published a methodological guide, which all stakeholders can use or adapt.

Each of the eight informal settlements has between 200 and 300 households, and is home to between 1,000 and 2,000 people. All residents from the eight neighbourhoods (around 10,000 people) are invited to take part in activities such as training and group meetings, and to benefit from improvements to community infrastructure. Resident committees (known as PASSA groups) identify homes that are unsanitary or unsafe, and prioritise these families for assistance and support. These households are offered a renovation ‘kit’ to make improvements and a feasibility study is carried out to determine which materials will be purchased. In most cases, wood is used to reinforce or rebuild the structure of the homes, while metal sheets are often used for the roof and walls. Masonry and plumbing work is also sometimes required. In around a third of homes, families carry out the work themselves. However, if the required renovations are more complex, a craftsperson – usually a local carpenter – is employed, where possible with the support of family members.

The costs are shared between the household and PE&D, with loans available from the project’s financial partner, Chamroeun Microfinance Institution. This allows families to access micro-credits with regulated interest rates and flexible repayment arrangements. The most vulnerable families receive a fully-funded kit from PE&D.

In terms of social support, the most vulnerable families are identified by Samatapheap Khnom Organization (SKO) and receive family support from a social worker for between six and nine months. Support centres have opened in two of the neighbourhoods. PE&D has initiated financial empowerment groups and collective savings groups in two communities, with others in the training phase. These groups are primarily aimed at women experiencing domestic violence.

Women who experience, or are at risk of, domestic violence receive individual psycho-social support on a weekly basis. Women and their partners also receive training in financial management using an adaptation of the GALS (Gender Action Learning System) method, which encourages participants to consider gender inequalities and the link to poverty and domestic violence. Financial education is used as a starting point in raising awareness of gender issues and mobilising people, particularly men, in improving gender relations in their own families and communities.

The project has made homes in the informal settlements structurally more secure, mitigating the risks of flooding and collapse. To date, 88 homes have become structurally safe, and 297 people (including 190 women) have been trained in sustainable construction techniques. The project has also created a safer home environment for many, while working closely with families to improve their opportunities, reduce domestic violence and improve financial independence.

Social support has been provided to 206 families, including domestic violence-related support, while 152 people (124 women) have been trained in the PASSA approach. Training has also been provided in financial education and gender issues (to 140 people, including 100 women), family support (58 people, 50 of them women), and savings and credit groups (34 women).

The collective savings scheme for women who experience domestic violence has not only strengthened the bonds between participating women but given them a means of securing greater financial independence. Resident committees have also helped strengthen solidarity with neighbourhoods and to galvanise community engagement. Around four-in-five (80%) of community volunteers have been women. An initial aim to train 40 craftspeople in construction has already been exceeded, thus creating new and better economic opportunities and promoting financial independence in the settlements.

By the end of the first phase (Summer 2021), the project aims to have improved 150 homes and provided family support to 300 households.

A further three year phase has already been planned. PE&D is also investigating the possibility of extending the project to other Cambodian cities. They continue to tackle the issue of legal access to housing – a major barrier to larger-scale upgrading – and to advocate for the development of social housing, with a study due by the end of 2020.

The project’s critical role has been underlined during the COVID-19 crisis, which has confined many families to cramped, unsanitary housing, increasing the risk of domestic violence and depriving families of a way to make a living. It responded by mobilising funds to train residents in prevention and treatment, distributing hygiene kits and books to children of two targeted communities, organising donations for households struggling with a loss of income and mobilising community volunteers to provide support for families experiencing violence against women and children. 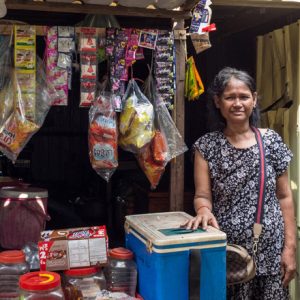 Ms. Chan Rin is 58 years old and is a groceries seller. She lives in Preaek village and has two children.

PE&D introduced the housing repair kit activity to me, and I thought that this project would help me improve my house conditions. I thought that it is the opportunity to renovate my house with the support of PE&D and my neighbours.

If I had missed the chance to renovate the house this year, I wouldn’t have dared to stay in the house anymore. My house was leaning to one side and I felt unsafe. I have lived here a very long time and I had always lived in a very precarious house.

After receiving materials from PE&D, my children worked on the house renovation.

Now, we have a better house and we learned how to maintain it and look after it.

The villagers say that my house is very good compared to the previous one. I am glad to hear their compliments about my new house.

My village has improved thanks to this project. The villagers are happy to see that some fragile and unsafe houses were renovated. 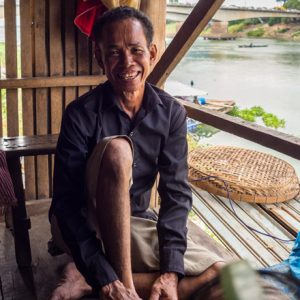 Mr. Chin Sao is 51 years old and a construction worker. He lives in Daeum Chan village and has two children.

I live in a poor settlement in Phnom Penh. I didn’t know how to make sure my family had a good and safe shelter. At some point, it was not possible to live in my house anymore because it was very fragile, so I decided to ask my neighbour for a place to live temporarily.

When PE&D raised awareness about their project, I decided to join to improve my family’s conditions. Luckily, I got support from PE&D to renovate my house and now I can live in my own house again.

I had experience in construction and I attended construction technical training with PE&D. So I rebuilt the house myself and now it is safe. I no longer have to worry about the roof leaking or collapsing when it rains. I was afraid that my house, on the riverbank, could be taken out by the water when the river level rises.

Thanks to the renovation, my family improved both their livelihood and living conditions.

Through my participation with the project I learned about hygiene, house maintenance, and the importance of sending children to school. I also learned about financial management, which helped me to improve my livelihood. There were many positive changes now thanks to the project – such as better hygiene in the village, my house is better and safe, and I can look after my family better.

3 hours ago 🚪 As the war continues in Ukraine so does the work of organisations focused on securing longer term homes as well a… https://t.co/La396DR7Gi