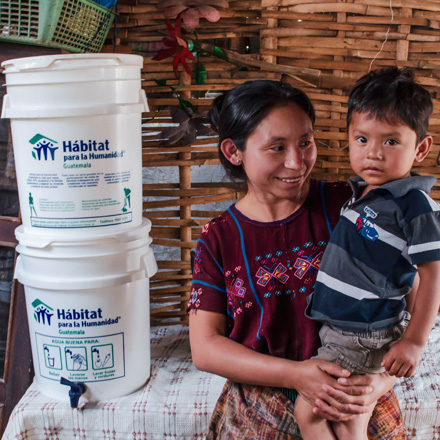 Access to safe water and adequate sanitation services in Guatemala is a challenge that still exists in the present day. In 2017, the Environmental Ministry affirmed that 95% of surface water sources in Guatemala were found to be contaminated. Due to the lack of regulations and policies – such as a water law and poor resource management – limited access to potable water affects the country’s most vulnerable populations. In the case of small children, this contributes to 1,100 deaths every year[1] due to gastrointestinal diseases and diarrhoea.

In the rural areas of Guatemala more than one-in-five (20%) of the population does not have access to any source of water – the rest are subject to intermittent services that are lacking in both quality and quantity. The variability and changes in the climate only increase the water shortage, affecting mainly families living in extreme poverty, as they lack the resources and capacities to adapt properly in the face of events such as droughts, hydric stress and the contamination of surface water sources[2].

Water services in Guatemala are found mainly in urban centres, because of internal migration.  This leaves just under half (46%) of the rural population (close to 3.5 million people) in regions with no public investment in such programmes. In terms of adequate sanitation services, municipalities are increasingly providing drain connections and catchment systems for residual water in urban zones, even though the majority of the water does not receive treatment and is dumped into local bodies of water. In rural areas, around one-in-three (more than 30%[3]) of the population does not have access to any kind of sanitation service which clearly impacts their well-being and quality of life.

Habitat for Humanity Guatemala has worked to address these realities since 2011. It provides solutions that supply quality standards inside homes, such as sufficient quantities of safe drinking water and adequate sanitation services.

Habitat Guatemala has implemented rain-water harvest systems in zones with vulnerable climate conditions. In order to ensure the drinking quality of the water, we have installed purifying water filters which separate particles and micro-organisms such as viruses and bacteria through a porous layer, working at 99.99% efficiency[4]. The system uses gravity as an energy flow in order to obtain potable water. The purifying water filter guarantees access to 18.5 litres of water every eight hours. It also reduces household expenditure by reducing energy used to boil water and the purchase of bagged or bottled water.  Through our evaluation process, it has been evident that the prevalence of gastrointestinal diseases has reduced greatly, especially in children.

The solutions implemented to improve sanitation have been diversified in order to meet different needs. Ventilated latrines, fertilising latrines and black water treatment systems can help eliminate the practice of open defecation and to conserve the water resource.  Habitat Guatemala has also helped to implement pilas (a multi-use washing station that is an integral part of a Guatemalan household) as adequate washing stations and sumps for the treatment of grey waters and to prevent the accumulation of surface water. According to field evaluations, the introduction of adequate sanitation decreases the prevalence of gastrointestinal and infectious diseases by reducing the spread of pollutants.

Since the start of the Healthy Homes for Humanity Programme in 2011, Habitat Guatemala has implemented 34,800 solutions focused on improving access to water and sanitation. More than 200,000 families across Guatemala have benefited – through subsidised projects and donations, financing and micro-financing, adapted to the diverse realities of the communities in need.

As Habitat Guatemala continues to work across the country, the organisation has set a goal to support one million individuals by 2023. Through the creation of new products, we intend to not only address the lack of access to safe water, but the varied aspects surrounding providing adequate living conditions to the population in its entirety.