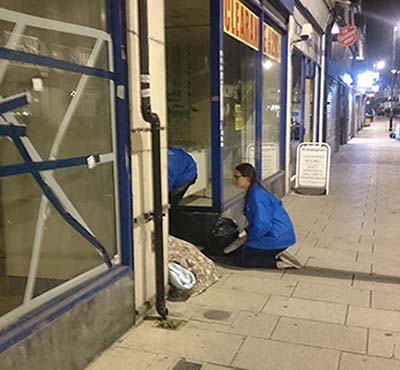 I joined 55 determined people for a community briefing event in Croydon on a warm Saturday in September attended by the Mayor, his consort the deputy Mayor, the local MP and Housing Minister Gavin Barwell, local council representatives, volunteers and the dedicated staff of Evolve Housing + Support, a local organisation dedicated to finding solutions for people who are homeless.

Despite the warm day it chilled my heart when I heard the results of the week of action which they called CR Zero 2020 – a key part of their campaign to end chronic street homelessness in Croydon by 2020.   The campaign ‘connections week’ ran from 30 August to 1 September 2016.  Over 90 volunteers from the local community spoke with people who were sleeping rough on the streets to gather information on who’s out there, what their needs are, and what options are available to get them into accommodation. So many were young people, most were from the area, and many were affected by other issues, such as physical and mental ill-health.

Much information has now been gathered and some of the figures we heard at the community briefing included:

It can be too easy for statistics and numbers to obscure the truths behind them, of the real people and real lives. But sometimes data can hit home and make a real, personal connection to our lives.  Most shocking to me of all was that the team of volunteers had met a woman of sixty-seven, on the streets with no place to call home, and a pregnant woman with nowhere to make a safe nest for the new life she was carrying. Two women – one more vulnerable through age and another through the extra demands of her precious growing baby – sleeping out on Croydon’s streets.

I thought of my own bed – soft, wide, safe – my pillows, my bedside light, a nice warm drink within easy reach. I am also sixty-seven and despite all of my cosy comforts I still struggle to sleep sometimes – the symptoms of OLS (Old Lady Syndrome) mean that I wake with creaks in my legs and a few aches and pains. I have to shake myself and have a strong cup of tea before I can face the world.

How wrong, how shocking, how disgusting that right now, in this country, at a time with so much visible wealth, so many empty homes, such an honourable history of protecting the most vulnerable in our society, that a woman of sixty-seven has to sleep out on the hard stones of our streets. No privacy, no protection, no comforts, no peace.  How can this happen in 2016?  It is truly an indictment of our failing system, the destruction of the public state, the tearing apart of those safety nets designed to save the poorest and the most vulnerable, a system which was dedicated to ensuring that at least those who were the most frail, the most in need – the very old, the very young, the very sick – would be protected.

That we can find the not-yet born and those at the later stage of life – when pensions, hobbies and relaxation should be beckoning – sleeping out on the street, must be a call to action to everyone.  Charities, volunteers, politicians, business, and local government must work together, urgently, to make sure that this outrage against human decency ends, not only for an old lady and a pregnant woman, but for all the other people sleeping, all night – out on the hard stones of Croydon.