The loveliness of Londoners – and the pain and loss 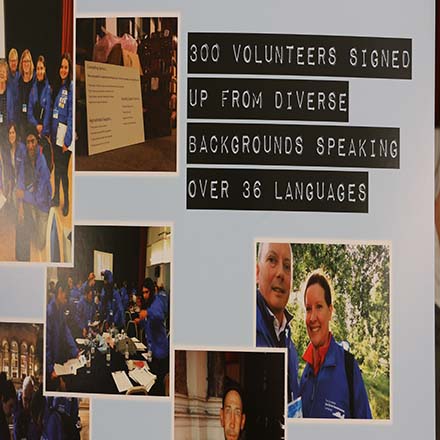 Despite the sun shining it has been a dark time in the world recently. It has been difficult to keep focusing on a better future when there’s been so much violence, pain and mayhem unleashed nearby and far away.  It also seemed unlikely that walking the streets of London late at night could lift anyone’s spirits, especially when we had all learnt at our training session (on a hot Sunday afternoon in July) that there had been an 11% rise in people sleeping rough in Westminster.

That’s 287 human beings enduring the misery and hardship of rough sleeping. Every night is an endurance test against hard pavements and harsh words. There is no safe place or welcoming pillow to lay your head, no privacy or sanctuary, no dignity, no door to close and nowhere to wash yourself or your clothes. Everything you possess has to be hauled and dragged from place to place.

I arrived on a Monday in mid-July at The Abbey Centre along with 300 volunteers ready to begin the first ever comprehensive survey of street homeless people in the UK.  As part of the wider European End Street Homelessness campaign I was taking part in Westminster Homeless Action Together in London with volunteers going out on the streets at night to find and interview homeless people. 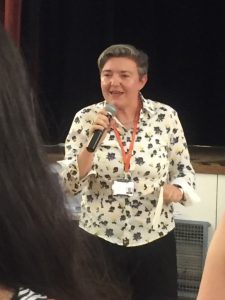 Petra Salva, from St Mungo’s, reminded us so powerfully at our briefing why we should feel real anger that anybody should have to sleep rough on the street, that anyone has to have these noisy hard, dirty streets as their only home. I was put in a group with Lloyd, our expert guide, a community activist with direct experience of living on the street without a home for three years.  He is an expert voice in forums that work to address the needs of those who are homeless and sleeping on the street. His thoughtful, intelligent, knowledgeable views were so helpful to our diverse band of women volunteers in our group. All so young, so committed, so dedicated and so sensible. I have to self-select out of those categories, most especially the young category, as I have had at least an extra 35 years to learn to be as smart, compassionate and savvy as the brilliant young women volunteering. I was lucky enough to join this group of volunteers which included Dana, a student; our leader Marta, a Spanish woman who works for Zara; Alex, who is of Colombian and Moroccan heritage and works in financial services; and Rosa, who is Romanian and works as an economist for a government department. They had an amazing plethora of linguistic talents between them – humbling to those like myself who stumble through life speaking English/Malapropism and with increasing age cannot remember anyone’s name!

The dedicated group I went out with on that Monday were a remarkable example of the better side of London; busy, bustling, materialistic capital city showcasing some of the most extreme aspects of inequality. From those sleeping rough on the streets to others basking in the most extraordinary luxury, London can seem  uncaring and immune to the sadness and loss on its streets  alongside the pursuit of excitement, fun or just getting to work on time. 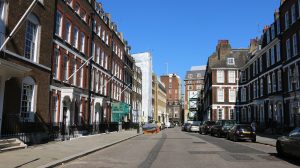 Despite the pressures and distractions of life in London, over 300 people gave up their own time for no benefit (other than a very nice Pret sandwich or two) but out of real concern, empathy and anger.

These volunteers were out late on a Monday night after a day’s work knowing that they would not get to bed until the early morning, a tribute both to their generosity and altruism but also to the good work of all the organisations that collaborated on this registry week. 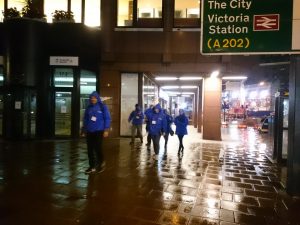 They went to the Romanian church in Holborn to encourage their congregation to get involved – that’s how Rosa joined us! They sent an email to people who signed up for a Westminster leisure card – yay! Alex brought in her good sense and 4 languages. They wrote to local businesses and yes, the amazing Marta – so calm, so confident, so sensitive, became our group leader for the evening (you would have thought she had been doing it for years not just a few hours training on the previous  Sunday). 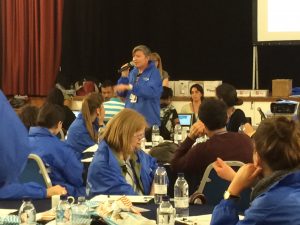 Seeing these young women sitting down with people in doorways and dark alleys in Covent Garden, gaining the trust of people whose life on the street has led them to build walls of mistrust and fear was remarkable. They were asking some really difficult and personal questions to individuals living on the streets about their histories, experiences, physical and mental health, abuse, and about the difficult path that led them to sleeping rough on the street. Not a destiny anyone chooses freely. 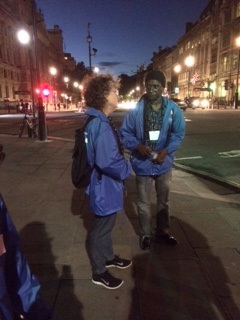 These young women give me hope for the future in these perilous times of uncertainty and the economy having the harshest effect on those least able to manage. We know many of those new to the hard life on the street are themselves young and their life chances damaged by changes to essential subsidies for sky high London rents and new requirements.   This leaves young people, who are poor and alone, with minimal resources and no right to find a home of their own including if they need help with their rent or ways to afford decent accommodation. Overall damaging government decisions have led to a dramatic rise in young people having to sleep rough on London streets. 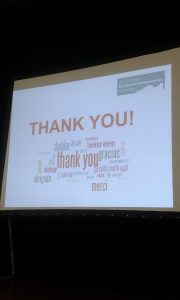 Alex, Dana, Marta and Rosa, with Lloyd’s wise guidance and the commitment and expertise of all those involved in Westminster Homeless Action Together, generously and courageously made a decision. They did not just walk on by and ignore those who are sleeping rough but chose to sit down with them and share their common humanity. They listened to the stories of their lives and the unhappy path that led them to enduring hard nights on London streets.  These dedicated volunteers went out on the streets of Westminster late on a muggy Monday night armed only with their empathy, goodwill and the surveys, to help us all gain a real understanding of the lives of homeless people and the urgent need to end street homelessness now.