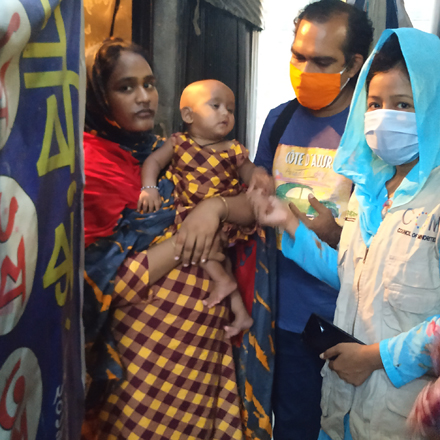 We are currently working with the Council of Minorities on a community-led development in former refugee camps in Dhaka, Bangladesh. One of the principal activists inspiring and carrying out this work is Khalid Hussain. In this feature, Elena Garcia, Hannah Sholder and Mariangela Veronesi chart Khalid’s life – from his birth in the camp to his studies across the world resulting in his current role in the community.

Refugee camps are usually intended as temporary places to urgently accommodate people displaced by conflict. However, in reality, refugee camps can often become longstanding settlements, serving as homes for people for years or even decades. Some well-known camps that have hosted multiple generations include the Palestinian settlements – established in 1948 – and the Sahrawi refugee camps in Algeria, established since 1975.

But there are other camps of which very little is known internationally. One of these is the Bihari camps in Bangladesh – which have been home to hundreds of thousands of people for almost 50 years.

Who are the Biharis, and what is their story?

The Biharis are an Urdu-speaking, Muslim-minority community who originate from India. They moved to East Pakistan in 1947 following the partition of India and Pakistan. After the independence civil war that led to East Pakistan becoming Bangladesh in 1971, their properties were confiscated and they were confined to a series of camps around the country – where many of them remain to this day. For decades, the Biharis were considered ‘stateless people’, as neither Bangladesh nor Pakistan recognised them as citizens. Finally, however, in 2008 – a Supreme Court Ruling eventually granted them Bangladeshi nationality.

Despite this change in legal status, it has not been matched by a change in living conditions, as the Biharis continue to experience overcrowding, poor housing conditions and limited opportunities.

In 2019, we started to support a ground-breaking project led by a local human rights NGO – the Council of Minorities, which is working to improve lives and prospects for the Biharis. Their community-led project is designed to support residents of two Bihari settlements around the capital Dhaka and includes ambitious plans to secure permanent tenure for residents, and opportunities to upgrade these settlements.

Like every great project, there is an inspiring team and individuals behind it.  This includes Khalid Hussain, the lead community organiser and an attorney who grew up in the Geneva Camp – the largest, with over 25,000 people living there, and most politically significant of the camps due to its location just a few steps away from the National Parliament.

Growing up in Geneva Camp

Khalid’s life started in an 8’ by 10’ hut in Geneva Camp in 1981, where he lived with his five brothers, three sisters and parents. At that time, ten years after the civil war, the wider understanding of the camp residents was still that they were ‘stranded Pakistanis’, and that they did not consider themselves part of the new nation of Bangladesh.

“The official ‘repatriation’ efforts [to Pakistan] were limited, and almost everyone who wanted to go had to make their own arrangements to be ‘smuggled’ on foot across India. There were famous brokers/smugglers living in the camps, and every few months they would make a trip. People really admired them due to their fashionable style, wearing ‘Kabuli’ suits. It was a costly endeavour for fake passports and fees to the smugglers, and…many people died on the way.”

One of Khalid’s brothers emigrated via this land route, and a further three siblings managed to take the journey by air – a much safer option for those who could afford it.

“Eventually the house became less crowded – which as a kid I was happy about. But, the government of Pakistan, once understanding the scale of the smuggling operation, eventually put a stop to it by not offering visas [in 2005]…So many families became divided, including mine.”

Khalid realised early on that education was the only way out of poverty. Despite his family struggling to afford school fees, he was determined to continue his studies.

“My mom heard about a US organisation called World Vision that was sponsoring the school fees of poor children, paying 75 per cent of their tuition and also buying their school uniform. Mom applied and I was accepted. For me, this was the first game-changer in my life.”

However, language was an issue. In his new school, Bengali was used – in the camp it was Urdu and English.

“The [other] students began to tease, mock and harass the camp students; to the point that almost all of them dropped out. Only me and a few others remained.”

After high school, Khalid enrolled in a business college, but then decided that this was not the path for him as he wanted to better serve his community. During his university studies, in 2006 he switched to Law.

In 2008, the Office of the United Nations High Commissioner for Human Rights (OHCHR) invited Khalid for a three-month programme to Geneva, Switzerland to study human rights law and protections for minorities.

“This was the second life game-changer for me. I was joined by four others – a member of the Sikh religious minority in India, a Roma from Ukraine, an Azerbaijani Russian, and a Hazara Afghan. They were all much better established than me, and from well-off families. We were given a monthly stipend – me and my family had never seen this sort of money before – and I became determined to save as much of it as I could.”

The money he saved and brought back to Bangladesh after three months in Switzerland was transformational for him and his family. It enabled him to launch his career and be able to accept the low wages of NGO work. In 2009, he became the first lawyer from his community who was born in the camps. He went on to officially establish the Council of Minorities in 2013.

“I remember being told while at OHCHR how minorities must stick together. This is where I got the idea to form the Council of Minorities. In addition to leadership work, it is focused on human and citizenship rights, documentation, and enforcement, for which we partner with the NGO Namati.”

New hope for the Bihari Camps

Since 2013, the Council of Minorities and Namati have helped issue 12,000 birth certificates, as well as supporting many camp residents to apply for passports and trade licenses.

After achieving citizenship rights and working to document these rights, Khalid and his team realised that the next major battle is physical rehabilitation and social integration of the camp dwellers. Over 300,000 people are living in the 116 camps across Bangladesh, largely due to economic barriers, but also due to social discrimination.

“They have become more vulnerable to eviction on the basis of their newly claimed Bangladeshi citizenship; the reason they were allowed to stay on the camp lands all these years was because they were ‘internally displaced’. This is no longer technically the case. The community must come up with their own solution, and we are working to unite and educate residents through this new project.”

They have already carried out a series of focus groups, and a baseline map. The next step is to conduct detailed survey work, and investigate the legalities of various land ownership models, including the Community Land Trust. This will hold land titles in perpetuity and allow for infrastructure and housing to be developed for the camps residents.

“With tenure security the community will no longer fear the threat of eviction and can incrementally upgrade…This is the project’s main goal.”

We are grateful to Hannah Sholder, Project Principal Investigator of the Community-led Development Project for Urdu-Speaking Bihari Camps and Fulbright Scholar in Bangladesh 2009-2010, for her interview with Khalid.