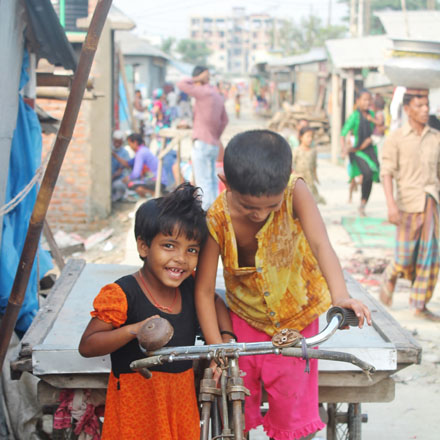 The second phase of a ground-breaking project to establish community-led development in a former refugee camp has begun in Bangladesh.

The project – which is co-funded by World Habitat – aims to secure the land in two ‘pilot’ camps, where over 6,600 Bihari families live. The Bihari population – non-Bengali Muslims who originate from India’s eastern state of Bihar – have long faced discrimination and statelessness. When India was divided and Pakistan was created in 1947, violent clashes led to many Biharis leaving for East Pakistan.

When East Pakistan became Bangladesh in 1971 – after an independence war – many Urdu-speaking Biharis were perceived to be in alliance with Pakistan. With repatriation halted in 1974, neither Pakistan nor Bangladesh granted citizenship to the Biharis and as a result, thousands have lived in camps for decades. In 2008, a Supreme Court ruling finally recognised their right to Bangladeshi nationality and they are, formally, no longer refugees. However, their living conditions have remained the same.

With ownership of the camps uncertain and land prices rising, this project aims to secure the future of the Bihari community through mobilising residents to develop a community-led organisation.  One proposal is the creation of a Community Land Trust, which would hold land titles in perpetuity and allow for the development of infrastructure and housing.

The Council of Minorities – a human rights NGO in Bangladesh – implemented the first phase of the project in late 2019. This involved focus groups with young people, elderly people and members of the current leadership. Through this process research into the history and legal status of the land was conducted, and young people were involved in a physical and social mapping exercise, to gather knowledge of the camps’ infrastructure, land use, and livelihood options. The final part of phase one – workshops to develop leadership of the emerging community-led housing organisation – were postponed due to the outbreak of COVID-19.

Rabeya Rahman, a community architect and Design Lead for the project, said:

“As our country faces new and challenging crises, the struggles of the Biharis are perceived as a ‘dead issue’ especially after losing their ‘refugee’ status. As they continue to live in a state of limbo, with not just one but now third and even fourth generations have grown within the confinement of the camps. Uprooting such communities without a durable solution will have its consequences, hence it has become necessary, more than ever, that the community empower themselves and defend their rights.

“Creating maps and profiles at the community level can be a powerful tool since it presents a collective expression of their entitlements. This will enable them to legitimise their claims and actively decide what development should mean in their own communities and territories.”

“We are really enthusiastic about working with such a ground-breaking project. Establishing community-led development in a former refugee camp pushes the concept of community-led housing, while also retaining the same objective of giving communities more control over their homes.

“Following the successes of phase one, the second phase will deliver more significant community mobilisation, networking and ultimately, the creation of the by-laws, mission and vision that will govern the community-led organisation. Preliminary outreach work with camp residents and key allies, such as architects, planners and lawyers, will resume. A household survey will be conducted through a detailed mapping exercise using new technology and training provided by Cadasta – a global non-profit organisation that supports residents of informal settlements – to document the existence of their homes and fight for tenure recognition. Eleven young people from each camp will be employed full-time to analyse and process the data collected.”