Community-led housing in Latin America and beyond 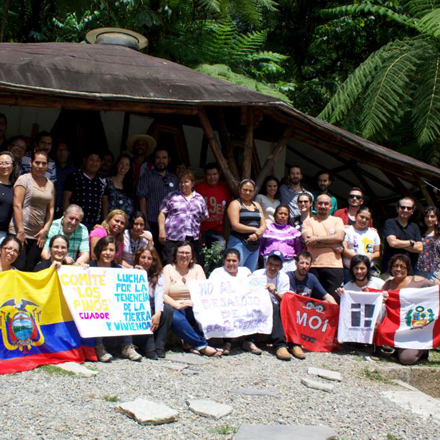 Over the last few months, my work phone has been buzzing more actively than ever. In one click, I am suddenly following marches for housing rights in Brazil, forums on access to land in Paraguay, reconstruction efforts in Mexico, post-hurricane fundraising in Puerto Rico, celebrating 49 years of community-led housing support in El Salvador, training exchanges between Uruguay and Peru, and much more.

This technological full immersion into the world of Latin American community-led housing is actually the electronic manifestation of the ties built throughout time. In fact, World Habitat has a longstanding relationship with some organisations solving housing issues through community organising and action. For example, a number of incredible Latin American organisations have won or been finalists of our World Habitat Awards, others have been peer exchange participants, or we’ve had the chance to meet them through international events.

But, in addition to that, this summer offered a great opportunity.

In June, two important events took place back to back in Mexico, gathering various actors working in the region. These were the Habitat International Coalition Latin American (HIC-LA) member’s meeting in Cuetzalan, Puebla and the regional hub for the Social Production of Habitat Platform in Mexico City.

The first event was a chance for HIC members such as community-led housing groups and networks, and professionals or academics supporting them, to develop and advance on shared objectives and connect on common problems and challenges. The second event, coordinated by urbaMonde along with its regional partners, the Uruguayan Federation of Mutual Aid Cooperatives (FUCVAM) and HIC, focused on sharing experiences and details of exemplary projects happening in Latin America, through an Award process (now in it’s third edition), and a series of workshops where participants delve into how each project solved housing issues. This year, projects from Brazil, Ecuador, Paraguay, Colombia and Mexico were represented. These offered solutions ranging from environmental eco-neighbourhoods, preventing floods and evictions, and bringing back indigenous building techniques and more. In addition, the Caño Martín Peña community was also invited to share their experience as the first Community Land Trust to be created in an informal settlement.

These events were an incredible moment for actors to get together, learn from each other, and see how they could be helpful to one another. And, in fact, for us and any other of the present organisations, this wasn’t a standalone opportunity. Our participation in Mexico is part of a wider partnership with the Swiss NGO urbaMonde, through a platform enabling us and all those involved to be part of this close support network of organisations working on community-led housing. This Social Production of Habitat Platform is organised in regional hubs but works globally to exchange experiences, build up mutual support, and mobilise joint action internationally to make community-led housing an option for the millions of people in housing need.

I believe the value of collaborations like these can be demonstrated not only in the energy and enthusiasm in the room, but also through the number of ongoing conversations, collaborations, trainings and visits that have happened since and that will continue to take place.

This week I head off to Berlin for the European Collaborative Housing Hub (Experiment Days 2017), and next week my colleague Isobel travels to Oakland, California for the North American Hub (Intersections 2017).  I am looking forward to continuing to engage with more actors at an international level; to more updates in the next few months from around the world; for a German project to pick up skills from a Spanish one; for a community in Minnesota to adapt a finance model from Ottawa; for an Argentinian project to visit a cooperative in Bolivia; and, in the future, for an Italian project to learn about community organising from the Philippines or South Africa.

Follow us on Twitter @bshf @MariVeroUK @IsobelAshford1 for updates from the upcoming European and North American hubs. And if you’re also a community-led housing actor, consider getting involved in the Social Production of Habitat platform to become part of an international community of changemakers.