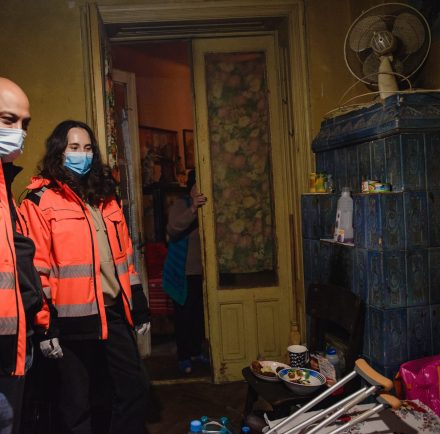 World Habitat wants to make housing a basic right for everyone. We share this bold and important vision with our newest member of the European Campaign to End Street Homelessness: Bucharest in Romania, led by our partner Carusel.

The European End Street Homelessness Campaign is a network of cities working together to end street homelessness for good.  Hosted and funded since 2015 by World Habitat, the Campaign:

In Romania, the Social Work Law 292 / 2011 provides the legal definition of homelessness, which includes being on the street, with no house and nowhere to stay.  There is no up-to-date official data regarding the number of people experiencing homelessness nationally and it is only this year, 2022, that the Government has been working on the first national public policy targeting people experiencing homelessness.  In addition to a lack of social housing, people experiencing homelessness face several issues in Romania. To access employment, housing and other services citizens need an official ID, and this is linked to an address. Without an address the Government issues a temporary ID for one year which says you are homeless, which is discriminatory and fosters second class citizenship. In addition, most buildings are privately owned, and wages are low so poor people can’t get credit to rent flats or buy things.  Public perceptions of homelessness in Romania are such that people are often blamed for losing their housing and made to feel shame.

Bucharest-based Carusel provides direct services – such as outreach, shelters, shower van, integrated day centres – to those facing multiple disadvantages.  The NGO supports around 2,500 people a year, including those who are homeless, people living with tuberculosis (TB) and HIV, sex workers, and people who inject drugs.

“It is important for us to be part of a European network of organisations sharing the same dream – a world where everyone has a place to live, where, no matter who you are, human rights are respected and where every single person is treated with respect and dignity. A world where solidarity truly is a core value and where no one is left behind.”

“We are delighted to formally welcome Bucharest to the European End Street Homelessness Campaign.  Carusel is already making a tangible difference to the lives of many people, with an impact that goes beyond their size as an NGO.  We look forward to working together to achieve our shared vision of ending street homelessness and making housing a basic right for everyone.”

Since March 2022, Carusel has also been instrumental in frontline emergency efforts, running a shelter for people affected by the conflict in Ukraine.  They provide temporary accommodation, advice, support, food, medical and hygiene supplies, local travel/tickets, and medicines. As we did with Campaign partners in Bratislava and Budapest, World Habitat provided a donation of £5,000 to Carusel to aid this vital emergency work in Romania as the scale of the crisis in Ukraine unfolded.  You can donate directly to support Carusel’s work here:  https://carusel.org/donatii/