A tenant-run housing co-operative is responsible for the social and environmental regeneration of this disadvantaged and semi-abandoned housing estate near Perth in Scotland. The local community has been involved throughout the process. Emphasis has been placed on keeping design within the cost yardstick, creating local employment opportunities and reducing crime. Energy saving design has reduced the incidence of fuel poverty and damp-related illness.

Fairfield is a residential area lying one mile to the east of the centre of the city of Perth in Scotland. Perth has a population of 42,000. It is generally regarded as a wealthy city with some areas suffering urban decline. Fairfield is one of these areas. It consisted of 452 houses built in the mid 1930s, providing homes for 1,500 residents. During the 1960s and 1970s the estate entered a period of decline and became a sink estate. By 1984 the number of residents had fallen to 400 and it was regarded as one of the most deprived housing estates in the east of Scotland.

The Fairfield Housing Co-operative was set up to stem the decline in a difficult to let 1930s Fairfield housing estate and to restore it in a socially and environmentally sustainable manner. The project comprised the renovation of 251 units and the provision of 60 new build units. The private development renovated 30 units and has further built 26 new units. The agreed master plan distributed the various housing developments throughout the site to ensure that the new community of Fairfield would not divide itself under their respective ownerships. Since completion of the majority of the physical regeneration works, Fairfield Housing Co-operative has agreed to undertake the responsibility for the maintenance and management of the estate.

The residents of Fairfield were fully engaged and involved in the project at the community consultation level and throughout the implementation stages. The residents continue to remain active in the ongoing management and maintenance of the project. The active involvement of the local community was achieved initially by the appointment of resident representatives for the project co-ordinating body. As each new phase of the regeneration work was completed residents became more positive in their approach but it took until at least half the site areas had been developed before a fundamental change in attitude had been achieved. All tenants were given the opportunity to be involved in the interior design options of the renovated units and, within a specified budget, to choose features and design aspects of their new home.

Phase 8 of the project involved the construction of 14 low-allergy houses with the avoidance of asthma triggers, providing easy to clean interiors that do not support/filter out the living organisms that produce allergies. Research will be carried out on the effectiveness of the dwellings in reducing the incidence of asthma. The objective is to develop an affordable design for low-allergy housing and disseminating the information as best practice.

With each phase of the project the environmental agenda was increased to the point where the latest phase comprised a very healthy building specification. The reuse of materials, reduction of formaldehyde off-gassing, use of screws in stead of nails to enable easier reuse and benign timber treatment where necessary have all been used as standard, as well as high levels of insulation, double glazing etc. The new build developments used conventional timber frames, but with an innovative breathing inner skin that ventilated into the cavity. Passive solar design and natural ventilation were also included in the design.

The project has achieved wide-ranging recognition for having tackled issues of affordability as well as those of ecological design and social inclusion. There are ongoing jobs in cleaning and maintaining the estate as well as with landscaping initiatives. Indirectly, changing the name of the estate has meant that job applications from people living on the estate are not immediately rejected because of the stigmatised address. A Trust has been set up parallel to the co-operative to deal with employment issues, which has enabled local people to be involved directly in the construction process.

Warmer houses have resulted in a reduction in damp-related illnesses and with regards to crime, there has only been one recorded break-in in the last three years. The main problems have been minor street fighting incidents and some vandalism. A resident survey that was carried out further showed an increased level of satisfaction that residents felt from being part of the community. They now take great pride and interest in maintaining the well-being of the estate.

In 2001, the Scottish Homes carried out an evaluation of Fairfield, titled ‘Community Regeneration Monitoring Report.’ The report found that the population levels had increased and sustained since regeneration with waiting lists indicating an increased popularity. By 2000, the population had returned to 1,200 with a good mix of families, single and older people.

In addition to the improved health standards and reduction in unemployment and crime, the report further indicated the increased number of young residents in further education with an overall increase in the average school leaving age and a proportion of young people taking up further education. 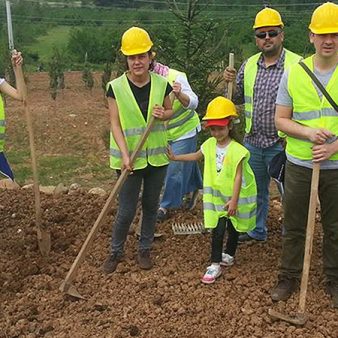 21 hours ago RT @SuchiComments: Always a feel of honour & joy when stories of @TheJagaMission are narrated and its spirit is widespread ! @HUDDeptOdish…