Developed by the local housing authority, this project meets the needs of extremely vulnerable street dwellers, providing highly specialised housing to meet their complex and acute needs. It was developed in collaboration with a range of different partners in the city, including the homeless persons themselves. Recognising and respecting these unusual lives, there are no requirements in terms of sobriety, rehabilitation or employment. Over 150 dwelling units have been developed in six different projects and all residents now have much more stable lives, with shorter spells of hospitalisation.

The overall purpose of the project is to identify and address the needs of extremely vulnerable and homeless persons in St. Hanshaugen. It is recognised that although this is a comparatively small group numerically, they have the right to have their needs addressed.

The housing standard in Norway is uniformly high, and the number of homeless people is low compared with most countries. Nonetheless, it has been recognised that there is a need for a strategic public effort to combat and prevent homelessness, particularly when it is associated with poor mental health.

Although attempts have previously been made to house vulnerable people with multiple problems in St. Hanshaugen, the accommodation had not been appropriate for their particular needs and they continued to sleep rough, living in tents or under railway bridges. Problems experienced include severe and multiple mental health and psychiatric needs as well as substance abuse. Many people do not want treatment and avoid all contact with support services, and in some instances, living with others adversely affects both their physical and mental health. As is common elsewhere, these various groups were seen as having uniform needs and the city provided an identical response, whereas in fact individuals experience a wide range of different problems and being treated inappropriately only served to further break down their dignity.

The approach pioneered in the St. Hanshaugen District of Oslo accepts and tolerates ‘unusual’ people and seeks to offer a range of provision to match their needs. There are six individual projects developed to reflect the variations in need identified. These are:

All projects are staffed at an appropriate level by staff with a daily responsibility for the residents and their well-being. Since the level of support provided is a contentious issue for many residents, the most appropriate form of support was discussed with them in advance. There are no requirements regarding sobriety, rehabilitation or employment. A common request is to be spared ‘all that socialisation’ and care is taken to ensure that these preferences are respected.

These projects are the result of collaboration between many stakeholders in the city. These have included potential residents, voluntary organisations, students from the Oslo School of Architecture and Design, Norwegian armed forces engineers, Government agencies and departments and the Norwegian State Housing Bank.

The projects received national funding for the initial capital costs of construction and set up, after which the projects have been expected to be self-financing from rental income. Funds continue to be received from the city of Oslo and the District Administration. Although the projects are designed to be self-funding from the rental income, not all of them have achieved this, particularly those where there are high staffing levels. All residents pay rent which is either deducted from their disability benefits, or if they do not receive these, they are provided with housing benefit to meet these costs in full.

Accommodation for the disadvantaged is a major national commitment and the Norwegian State Housing Bank has continued to provide capital funds for similar housing projects providing permanent accommodation, as well as giving reasonably termed loans to the city districts.

All of the projects address a similar theme of meeting the needs of the most vulnerable groups in society and have the following key innovative aspects in the approaches developed:

The Flexbo houses are small, made primarily from local timber, and therefore have only a light environmental impact. Other accommodation is developed by converting existing buildings or new construction. All projects are developed using the high environmental standards required by the Norwegian building regulations and wherever possible environmentally friendly solutions are used for all installations and technical aspects of the design.

There is both national and local government commitment to these projects, none of which could be developed without this support. It is intended that the running costs should be self-financing from rents and this has been achieved to date in four of the six projects. However, since virtually all rental payments are supported entirely by government subsidy, this concept of self-financing is somewhat limited. Some savings have been achieved as the number of days residents spend in very expensive psychiatric hospital care is reduced.

Residents are provided with opportunities for paid employment on some of the projects and two of the five Flexbo residents have been involved in working on the plot around their houses, tidying and preparing the land. Where appropriate, residents are encouraged to take part in the national government scheme enabling them to work tax-free for a certain number of hours per week as and when they are able to or wish to. However, given the nature of some of their disorders, this may not have more than a marginal impact on residents’ income. Providing accommodation that is suitable to residents’ highly specific needs has meant that they now have access to accommodation that they can consider a permanent home, often for the first time in many years.

The projects provide conditions that enable residents to become integrated within their local communities if they wish to, such as invitations to local events where appropriate. For many residents however, meeting their fundamental needs takes most of their physical and mental energy and there is little inclination or capacity to interact with the local community. Opportunities are limited in some cases as the houses are deliberately isolated from local communities to meet residents’ needs and wishes. For the most violent residents, integration in the local community is not easy, as they cannot go out alone and always have to be accompanied by at least two members of staff. For the families living in Schwensensgate who are primarily refugees, integration with local communities is vitally important. They receive lessons in the Norwegian language, culture and society during their stay and are thus in a much better position to integrate themselves into the local community, when they move into their permanent accommodation. The Flexbo residents have the right to vet anyone coming to live in their cluster of mobile homes.

All residents are now much healthier and safer, since they are not sleeping rough and are receiving appropriate support to help them cope with the daily problems they face. Safety of the residents was a key consideration in the design of the accommodation and features such as underfloor heating, sprinkler systems, automatic back-up in case of a power cut, robust fittings and furniture were included to reduce risk of accidents.

Regular monitoring has provided evidence that the skills and abilities of the residents are increasing, as shown by the fact that they are coping with the degree of independent living. There has been a marked increase in the well-being of the residents. For example, the residents in Schandorffsgate have increased their awareness of their own health situation and are able to recognise when they need to be admitted to a psychiatric ward in hospital. One of the residents has also been able to move into his own flat after a year in the project as his confidence and abilities had increased sufficiently to enable him to do so. Residents in the Flexbo houses have started planning their future, with a degree of calmness and confidence that they did not previously have.

Attitudes and thoughts about the future have begun to change. One of the residents has started working, one has applied to be accepted for the Methadone project and has started attending the ‘Motivation Clinic’ and one has voluntarily admitted himself for detoxification because he wishes to stop his substance abuse. There are many more opportunities for the residents in society than there used to be. There is an increased recognition of residents’ skills and abilities, which has resulted among other things in the ‘Self-Builder Project’ where the residents are offered practical work training and full tenancy rights, provided they decorate and renovate the flats themselves.

Careful data gathering was carried out before the start of the project in order to provide accurate baseline data to be able to assess the impact of the project in the future. On-going monitoring of key indicators in relation to resident welfare is carried to understand whether the care is reflected in fewer days in hospital, shorter lengths of stay etc.

The project leaders have carried out extensive work in providing information and giving lectures about their work. The Flexbo scheme is now moving onto the second cluster in the project. Within the Oslo Municipality, several district administrations are already planning similar projects to Schandorffsgate and the collaboration agreement developed for the Grefsenalia Project has been used for other groups of people with mental disorders and has now been implemented in hospitals in other districts of Oslo.

Therapeutic and treatment solutions developed at the Ullevalsveien Centre for those with severe violent disorders have received national professional approval. 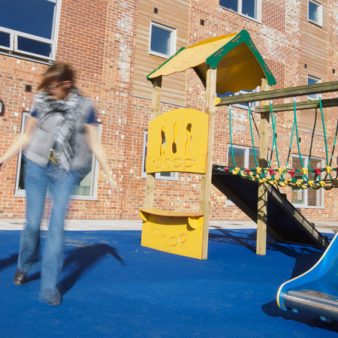