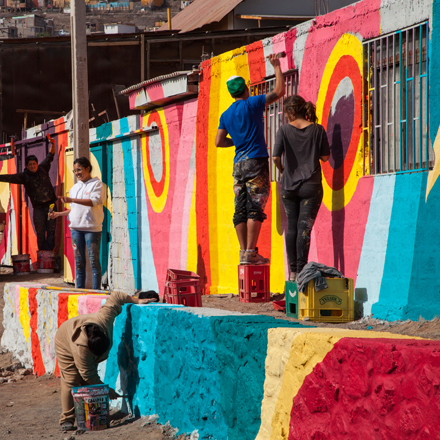 A series of large-scale street art projects in marginalised communities around the world has been named a Finalist in this year’s World Habitat Awards.

Crossroads participatory urban art projects use vibrant colours and bold design to empower, motivate and unite residents. They target urban neighbourhoods that have been stigmatised by issues like poverty and drugs and give residents a positive new sense of ownership and identity by involving them in the painting of giant murals.

Boa Mistura, a Madrid-based collective of artists, architects, designers and engineers with roots in graffiti art, is commissioned by local partners to carry out the projects. Since 2011, the eight-strong group has completed 19 Crossroads projects in 13 countries, many of them in Central and South America.

Residents are involved from the start and vote on the final design. Everyone is invited to take part in painting the mural but children, young people and the unemployed are generally the most involved. Hundreds of thousands of people live in communities that have participated in the street art projects, which Boa Mistura believes can be a catalyst for social change.

The striking murals not only aesthetically improve public spaces but also help to reverse residents’ negative perceptions of their neighbourhood and of their own capabilities. Through the process, new relationships are formed, old ones strengthened, and a sense of pride is instilled in the community.

David Ireland, Director of World Habitat, said: “This project illustrates how art can be used to help communities reclaim, transform and feel more positive about their neighbourhoods.”

The World Habitat Awards Advisory Group said: “Their work is visually stunning. Open spaces need defending – this project uses art and aesthetics to change the image and emphasis on the use of these spaces in cities.”