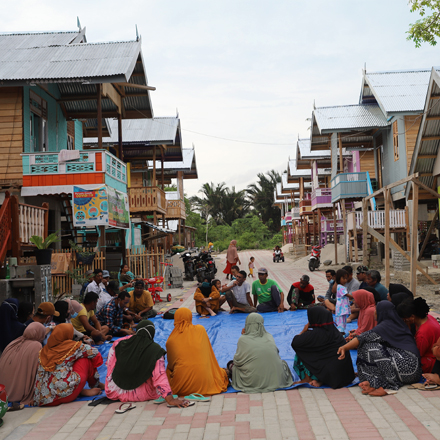 A project that supported a community to manage their own recovery, reconstruction and relocation following the devastating tsunami in Palu Bay has today – Thursday 16 December 2021 – been named a Bronze Award Winner in this year’s World Habitat Awards.

In September 2018, a powerful earthquake triggered a tsunami which devastated Palu Bay on the Indonesian island of Sulawesi. More than 4,000 people were killed and thousands more were left homeless.

Following the disaster, the government proposed the relocation of the most at-risk coastal communities, including residents of Mamboro Perikanan Village The relocation site, however, was 5km inland and too far from the villagers’ primary source of income.

Working with non-governmental organisation Arkom Indonesia, the community selected an alternative location in the safe zone that would enable them to earn income from the sea – mostly fishing, drying and selling fish. Their proposal – part of Arkom’s Building Homes Collectively for Better Habitat project – was accepted by local government and the survivors were actively involved in the design and construction of 38 earthquake-resistant homes. The new houses were completed in December 2020 and have so far withstood shocks below 5 on the Richter Scale.

The total cost of the project was approximately IDR 8.4 billion ($586,516 USD) funded through donations and grants from the Air Asia Foundation, Palu City government, Sheep Indonesia Foundation, and the Research and Development Centre of the Ministry of Public Works and Housing. Each household makes monthly payments into a Community Development Fund used for the community’s long-term educational, economic and housing needs.

The success of the project has prompted a change in official policy, that could give thousands more people the opportunity to decide how and where to rebuild their lives.

Mrs Emilia and her family lost their home and their livelihoods following the earthquake and tsunami in September 2018. They were initially confused about what to do. However, she was soon supporting other survivors and then became fully involved in the decision making and rebuilding process. She was part of the community that built 38 homes. She said:

“In our process of getting here (relocation site), we are not alone, we strengthen each other, help each other, co-operate well, that’s why we have arrived at this point.”

“The climate emergency is leading to higher sea levels and causing more powerful storms and tsunamis. These forces are putting coastal communities at far greater risk. Inevitably some coastal regions will become uninhabitable. Relocating affected communities away from their livelihoods is not the answer. This project has provided a solution by helping communities relocate to safe zones while still being within easy reach of the sea. This has enabled them to carry on their work in the fishing – and other – industries linked to the sea. This has allowed them to rebuild a safer life without being uprooted from what their whole community is based on.”

“What is particularly interesting about this is how the issue of land is being approached. This solves that issue and there are very few instances of that with emergency housing. They have a collaborative plan for the protection of the natural environment on which they depend for their livelihoods.”