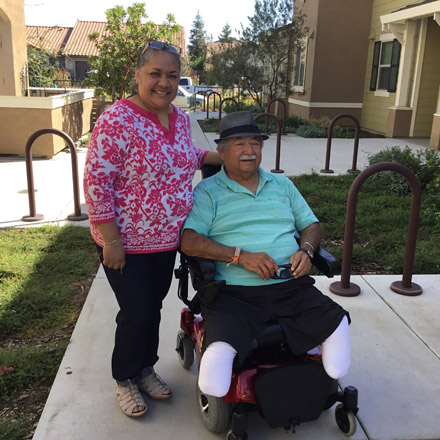 Mutual Housing at Spring Lake was designed to support agricultural workers to enjoy the benefits of ‘green living’, often only available to high-income homeowners. As the homes use around the same amount of energy as they produce, utility bills for residents are extremely low.

The estimated 6,000+ agricultural workers in the county have traditionally had to put up with some of the worst housing conditions and most dangerous jobs in the country. Seasonal employment means accommodation is usually only available at government-funded migrant centres during the farming season. Living in appalling conditions in privately rented housing is often the only other alternative for workers.

Mutual Housing’s work with residents goes well beyond providing energy efficient homes. Through a range of opportunities including leadership development schemes, peer lending circles and digital literacy classes, residents gain skills and confidence. For many this has opened up new opportunities in education and community life. New leaders have emerged from the community who now work to advocate for the rights of agricultural workers.

Saul Meneses, who moved into Mutual Housing at Spring Lake with his wife Orfalinda in July 2015, said:

“It has been a complete one-hundred eighty degree turn since we’ve been living here. Housing stability has enabled me to reflect on my past and though we have had stressful experiences, we still believe we are living a blessed life. Our quality of life is better now. It is peaceful living in the Mutual Housing at Spring Lake community.

Before we used to live in a community where neighbours played loud music at all hours with little regard for others. Air space was not respected either as people smoked wherever they pleased. For five years, we lived in an apartment there that was very cold and in poor condition. My wife had to board the windows up with tape and unclog the sink daily.”

“We are proud to be a part of a community that cares for the environment. We love our neighbours and enjoy the harmony we’ve developed. It is an empowering feeling to have our community play such a big part in stabilising our lives.”

David Ireland, Director of World Habitat, funders and co-ordinators of the World Habitat Awards, said: “Seasonal agricultural labourers are one of the most marginalised groups in the USA. Low and inconsistent incomes make it hard for them to rent homes in the open market. Mutual Housing California have managed to help a group not normally reached and proven that you don’t have to be a homeowner or on a high income to embrace green lifestyles.”