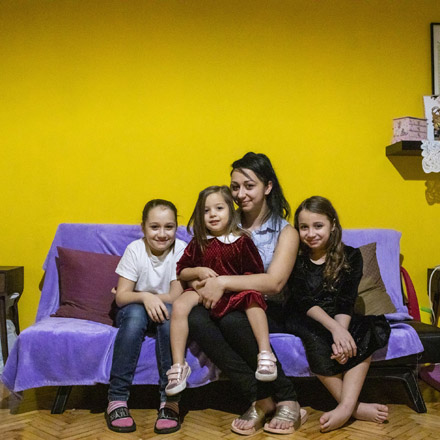 A housing renovation, employment support and housing rights advocacy project that delivers affordable rental homes for homeless and low-income people in Hungary has today been named a Bronze Award Winner in this year’s World Habitat Awards.

Developing and operating social housing and social care programmes in Budapest supports people to develop the necessary skills to live stable and independent lives, and, ultimately, to integrate into wider society. Working with partners, volunteers and future tenants in bringing empty properties and plots of land back into use as affordable rental housing, it is one of the first projects in Eastern Europe to adopt the ‘Housing First’ model and combine housing provision with social support.

Established by From Street to Home Association (Utcáról Lakásba Egyesület or ULE) in a country where street homelessness is a crime and state support non-existent, it is the only project in Hungary that delivers decent permanent housing for homeless people, in contrast to the shelter system prevalent across Europe. Since 2014, ULE has provided 29 homes for 66 people in some of the poorest districts of Budapest; worked with around 100 community volunteers to renovate homes; and supported 50 people per year back into work.

Resident Judit, aged 28, raises her three daughters in a social rental flat in the Castle district. She said: “I was still a young adult with two children, aged five and three, when I had to move out of the house owned by my then-husband. I spent the next six years in various temporary family and homeless shelters, and at the same time going to school to try to get a decent education. Then I got into contact with From Street to Home Association and I was blessed with this rental apartment in the Castle district: a neighbourhood where other people go for sightseeing. The first time I stepped into our new home, my breath went away: I could not believe where we were about to start living.

“My goal now is to graduate in the next four years and I want to continue studying even after that. Thankfully, I am surrounded by people who give me support and motivation. I know that I have been given an amazing opportunity with independent, self-sufficient housing.”

David Ireland, Chief Executive of World Habitat, said: “There has been huge progress in ending homelessness in Western Europe and North America where the Housing First model has been used. Progress has been slower in countries which do not have the same social infrastructure, government support and policies. And things are even more challenging in countries like Hungary where the national government has criminalised homelessness and appears openly hostile to homeless people. This project has taken some Housing First principles and made them work in an extremely challenging context – giving people the opportunity to have a safe and secure home while helping them to work their way out of poverty.”

The World Habitat Awards judging panel said: “Because of the criminalisation of homelessness in Hungary this is a very difficult context to work in. What is really promising is that they are working with more and more partners, including local authorities who are supplying homes for this scheme. When you want to establish a sustainable housing system, this is a key way forward.”