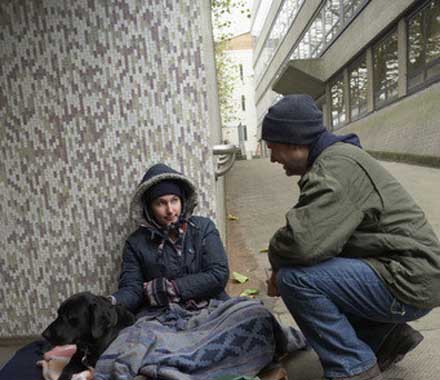 David Ireland comments on solutions to global housing issues, on his return from the World Habitat-funded peer exchange to the 100,000 Homes Campaign in the USA.

‘I read newspapers less often than I should these days but earlier this week I had a long train journey and bought a paper at the railway station. After a few minutes reading I began to wish I hadn’t bothered.   The lead story explained how human impact had resulted in the loss of half the world’s creatures in the last forty years. Elsewhere an article reported scientists saying global warming would be worse than feared, a Middle East expert predicted a fifty years war and a report declared the battle to contain Ebola was lost. The world’s big problems, it seemed to say, are out of control and insoluble. But after the week I recently spent in the USA, I know they’re not.  The 100,000 Homes Campaign, winner of last year’s World Habitat Award is a towering beacon of hope. It has provided proof that not only is it possible to solve one of humanity’s great social injustices; long-term homelessness, it has created a momentum that might just mean solving it is inevitable.  World Habitat recently took a group of experts and homelessness practitioners from around the world to Los Angeles to experience the campaign first hand and learn how it was done.  The 100,000 Homes Campaign led by the truly inspiring NGO Community Solutions ended in July this year after four years in which it inspired local communities across the USA to house 105,000 chronically homeless people. The successor campaign Zero:2016, also led by Community Solutions, seeks to finish the job and end chronic homelessness in the next two years.  Our visit started with a tour of the run down downtown area of Skid Row. The area is notorious for having the largest population of street homeless people in the USA. The streets are lined with make-shift shelters, cardboard boxes and shopping trolleys. Even some of the most experienced homelessness practitioners in our group were visibly shocked by the sheer scale of what we saw, heard and smelled; hundreds, perhaps thousands of people, living on the street in a tiny part of one city.  It demonstrated that there is still much to be done but also just why this campaign matters so much. Over the week we heard how the campaign worked by mobilising support against four simple principles:

Despite its name the 100,000 Homes Campaign was not a house building programme. It simply sought to use existing resources more effectively. Previously, chronically homeless people frequently missed out on benefits and housing that they were entitled to because they were allocated to others who were less needy. This isn’t just unfair, it’s wasteful. Hard economics show that permanently housing homeless people is actually cheaper than providing services to maintain them on the street. The campaign sought to change both hearts and minds. Instead of a slow bureaucratic head count, it pioneered the concept of a “Registry Week”. Communities were encouraged to mobilise volunteers to count everybody who was living on the street over a couple of consecutive nights. There was no laborious number crunching afterwards; the results were presented to the community and the media the morning after. Photographs and names of people were used prominently, making it clear who the most vulnerable people were. The clear implication was that if something was not done immediately, it would be those people whose names and faces stared down from the slide show on the wall that would die. Instead of abstract numbers, homelessness became personal.   Statistics can sometimes be boring but the campaign used them to remarkable effect. Community Solutions worked out the crucial measure of success. It was simply the proportion of the local homeless population that was housed every month. They worked out that if a community was scoring 2.5% or higher on this measure, it was on track to end chronic homelessness. The campaign measured performance and celebrated communities that achieved this target. It created an elite “2.5% club” and encouraged communities to compete to join it. The sense of momentum it achieved was palpable. In the end 60 communities joined the club and performance got better and better as the campaign continued.  The final principle was the adherence to “Housing First”. The simple concept is that homeless people are offered a home unconditionally. People are helped with problems such as alcohol or drug dependence once they are housed.  This differs from traditional approaches that offer a staircase approach to permanent housing via shelters. Traditional approaches seek to resolve people’s problems before they are housed. Housing First, although not universally accepted, is fast becoming acknowledged as the most effective means of resolving homelessness. The campaign has just provided the biggest case study ever to demonstrate that Housing First works. On one of our last days in Los Angeles we visited the San Fernando Valley and met the impressive community leader John Horne. He recalled a meeting of local homelessness practitioners just before the campaign started. A delegate put up his hand and asked “When are we actually going to do something to solve homelessness?”  His brave question is one that resonated with me. How often do we all go along with the flow and how rare is it that somebody dares to challenge the status quo? The 100, 000 Homes Campaign has challenged the status quo in a seismic way. Nobody can ever again say that chronic homelessness is unsolvable, because they have proved it isn’t. That is a huge achievement and not only makes it possible for this amazing campaign tp be adapted and copied across the world but perhaps makes it inevitable that one of humankind’s greatest ills, chronic homelessness, will be solved.’