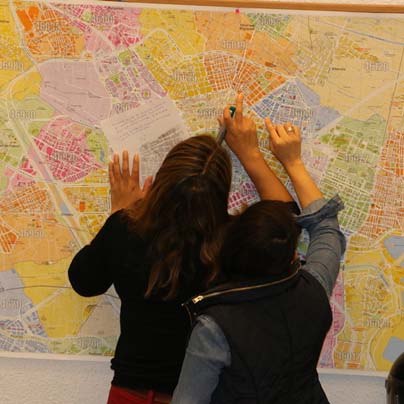 Valencia in Spain is famous for its wonderful lace and, of course, its oranges. It’s a beautiful city and has so many talented young people living there but also hides some sad secrets.  Figures show that the unemployment rate within the city is over 20% and this has had an impact on the increasing numbers of people being displaced, excluded and on the streets; without a home, without a job, without choices, without the chance to build a decent life. People who poverty has left stranded on the street. The delicate fabric of life has been torn asunder by the disaster of the financial crash of 2008. Even despite a strong family network and the recent election of a new progressive municipality, the solutions to the fallout from the challenge of ‘austerity’ and unemployment have been limited and unrealistic, particularly in addressing the disaster of street homelessness.

I was visiting Valencia with World Habitat to work with the talented team at RAIS Fundación, who run one of the city’s few day centres. The centre is located in the heart of the city and offers homeless people breakfast, a shower and the chance to wash their clothes – those normal everyday tasks we take for granted but for homeless people are another obstacle to them feeling included in society.

I was in Valencia, with Isobel and Kim from World Habitat, to see the launch of the ‘pilot of pilots’ – an innovative campaign that World Habitat are supporting using a model developed in the US by Community Solutions as part of the 100,000 Homes Campaign.  This successful campaign took a very different approach to the problem of street homelessness – by involving volunteers in meeting homeless people, respecting each person by getting to know them by name, doing rigorous but sensitive surveys that would provide the hard data on age, health status, years on the street etc but would also focus a gentle and empathetic light on each individual person by hearing their story. A process that not only motivates and energises the volunteers but provides such important tools to communicate the urgency of the issue to the wider community, the media and to politicians at local and national level over the 4 years of the campaign, the communities involved found housing for over 100,000 of the most vulnerable rough sleepers in the USA. 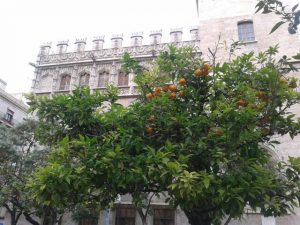 World Habitat, who run the World Habitat Awards, were so inspired by the 2013 winners -100,000 Homes Campaign – that they decided to see if it might work in European cities, working with FEANTSA the European network of homeless organisations to identify some organisations and cities that might be open to trying out some new ideas. That is why we came to be in Valencia with RAIS, who took the brave decision to be the first city aka the ‘pilot of the pilots’.

They knew this was an important opportunity to change the lives of homeless people in Valencia and, as Begoña, the inspirational Director of the region for RAIS described: ‘this was a moment to break out of the status quo’.  Her passion for change and her frustration both shone through in equal measure.

RAIS Fundación are experienced and determined – every day they see homeless people in their day centre and on the street. They hear the sad stories of people turned away from the night shelters because they have mental health problems or difficulties with addiction – the very issues that are often a response to their harsh lives on the street.

We met a man – I will call him Josef who had travelled to Valencia to pick oranges, who never got paid and became trapped, unable to return to his native Romania. For eleven years he has slept on a park bench.  Is it any wonder that he turns to alcohol for comfort and solace?  So alone, so little hope for the future, so worried about his need for health care – excluded at every turn by the harsh barriers to help.

It was so moving to see Guadalupe, so young, so energetic, who led our band of volunteers around the dark and frightening corners of the parks and dark and shuttered places round the bus station where homelessness people seek refuge after night has fallen. 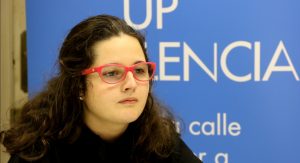 Despite a full day at work, her energy and compassion were boundless – her bright pink spectacles and her face shone in the dark – we had to walk very fast to keep up, but she was determined.  She knows this area well, she comes every Tuesday after work, to offer support to those whose only home is the street. She is a volunteer with Bokatas, who had partnered with RAIS to mobilise over 280 people to volunteer, to go out on the street for three nights to survey and count every homeless person they could find in Valencia.

It was wonderful to see these people gathering on the first night, squashed into the RAIS day centre – spilling out into the street, so diligent, so determined, so organised.  It was remarkable, so controlled but not ‘controlling’ so well thought out but somehow relaxed and friendly at the same time.

Each group of volunteers had an experienced leader, who already understood the realities of homeless people.  We also had the insight and knowledge of people who had been or were homeless themselves.  They could guide us all and give confidence to their compatriots on the street that all of us – in our high visibility jackets – were on their side and that they could choose to participate or not.  As Guadalupe said so clearly to Josef ‘you are in charge’. 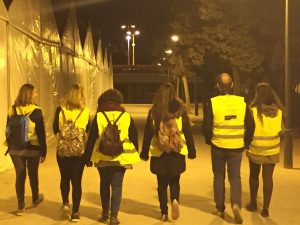 I was lucky enough to spend two nights working with Migue, a very dedicated professional who works for RAIS, and the quiet knowledgeable and charming Carlos, an older man (well not so old – younger than me ) who had worked for forty years for the same firm but when they went bankrupt, his life fell apart.  No money for rent, at 62 too young to collect his pension, he showed me the bench by a church in the centre of Valencia which became his home – he explained it was safer than other places, a street light above the bench, water from a fountain nearby to wash.  Carlos was immaculately turned out and told me how important and how hard it had been to keep himself clean and tidy when he was sleeping on the street.

Carlos had now found a room in a flat and was doing better.  He was on our team to help others, still facing the trauma and challenges of having to live your life on the street – how heavy that toll is.

Both he and Migue were such sensitive guides, so patient, so respectful. We met a couple living in a cardboard box – she was pregnant – having already lost 4 children, taken into care because they have no home.  No privacy, no utilities, just a garden torch for light, no kitchen, just the plastic knives and forks carefully tucked into the top of the box, no running water, just a plastic bottle or two, no door to shut against the world, just a bit of cloth across the cardboard.  They had dignity but their situation denies it every day and every night and RAIS, their partners, the volunteers and World Habitat are determined to change this. 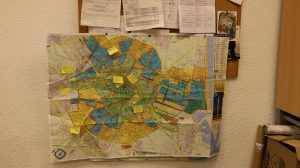 By the end of the three days, so many miles walked, so many important conversations, so many hours spent by the staff and dedicated volunteers, so much data entered far into the night by volunteers, with the expert help of Paul from Community Solutions, whose experience of thousands of surveys of homeless people is mixed with his knowledge of how to combine sensitivity and rigorous evidence.  We all knew we had the evidence; we had the human stories and the data – to show that the beautiful city of Valencia has an ugly problem – the safety net is torn and broken, the official figures do not tell the true story nor describe the scale of the problem.

That marathon street count – taken over three long and tiring nights had shown that over 404 people were homeless and on the street and this was so much higher than the official figures from the Study about Homeless in Valencia City by Valencia City Council (approx. 79 people in 2015). The reality shows a shocking figure but it was not shocking to Begoña and her passionate and determined team at RAIS – every day they see so many people with so many difficult stories.  They already knew that this is a city-wide emergency and that urgent and effective measures must be put in place to get people from the streets into homes as soon as possible – to leave them on the street is not an option. 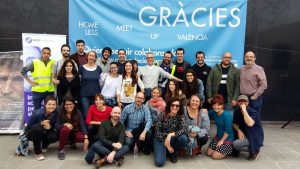 We know each day on the street robs years from people’s lives – now they know the true scale of the issue and have the hard data and 280+ volunteers know and soon the whole of Valencia will know. 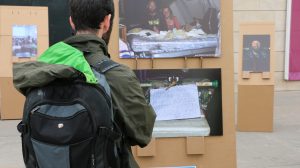 Everyone must work together to find immediate and effective solutions to rebuild the social fabric of this city, which has so much to be proud of, but can no longer hide this sad, dark and hidden story – of the failure to weave people who are on the street, ignored and excluded, back into a good life in lovely Valencia with its orange trees, its beautiful lace and its proud history of progress and cooperation.

The good news is that the Mayor of Valencia and the regional government have already met with RAIS and have announced a Housing First pilot in the city.  The log jam is moving and the journey has begun – to end street homelessness in Valencia.

12 hours ago 👨‍👨‍👧‍👦Multiple generations of families are living in dilapidated homes & with decades of underfunding, the supply… https://t.co/jhGkohDT3A