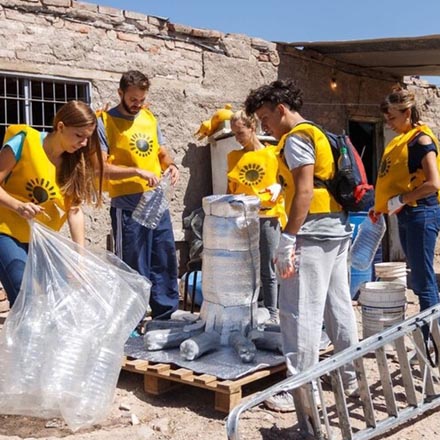 Here in the UK, the cost of solar panels for the average household is £6,000-7,000 (8,300-9,700 USD). Considering that upfront cost, and just how long it’d take to recoup that from reduced energy bills, it’s hardly surprising that only around 900,000 British homes have them. At the same time, latest estimates suggest that one-in-ten homes in England experience so-called ‘fuel poverty’ and as many as one-in-four in Scotland. Around 2.4 million households cannot afford to heat their homes. But solar power is still, for the most part, for those who can afford it in the first place. This is despite the huge role it could play in helping to achieve net-zero carbon targets, which is so vital in the face of the climate emergency.

But if the take-up is so low in the UK, what about in other less affluent countries? Well, in Argentina, there are many families who live in remote low-income neighbourhoods without the basic services which allow heating and cooling of their homes, or a hot shower in the morning. But Mendoza based NGO Ducha de Sol (Sun Shower) – an entrant to this year’s World Habitat Awards – have found a way to use solar energy to make these things possible, at an incredibly low-cost.

Using repurposed and easily accessible materials, they make and install solar technologies in homes. The use of plastic – otherwise waste materials – is not only environmentally beneficial, but keeps the costs extremely low. This means it can remain free of charge to residents, with schools, colleges and universities contributing to the costs of running workshops for local people to learn how to make their own.

The family-run NGO began developing their idea in 2017, first with hot water showers and since expanding to include full home heating and cooling systems. This is solar energy which actually is accessible to everyone. Alongside the cost benefits, residents have experienced improved health and hygiene – through access to hot water for washing and cleaning, and the reduction in CO2 levels in homes previously caused by poor and inadequate heating systems.

Their open-source concept means that anyone can learn how to make and install the technologies – the information is accessible, understandable, and easy to share. Residents can participate by collecting materials to be recycled, and then use these to build the installations with the support of over 100 volunteers. There are no complex mechanisms or fuel supply needed, meaning they require very little maintenance.

In just over three years, Ducha de Sol have already improved the living conditions of over 20,000 people. The outbreak of COVID-19 hasn’t slowed them down either. They quickly moved their training workshops online, which have reduced running costs. The organisation’s strong focus on transferring their idea to low-income communities everywhere has already led to replication in Mexico, Brazil, Chile, Bolivia, France, Spain, Madagascar and India.

Next, they’re developing a full solar house (La Casa Solar). Currently in the prototype stage, it will incorporate all the individual solar installations to provide all the benefits in one complete system. They plan to construct a model home on public land as part of an agreement with Godoy Cruz municipality in Mendoza, to act as a demonstration for students and neighbours. The municipality has also shown interest in equipping newly-built housing complexes for low-income people with their solar heating systems.

It’s amazing how such a simple and low-cost solution can have such a big impact on people’s lives. Neighbourhoods may still not have access to services such as mains electricity, gas, or running water. But Ducha de Sol support residents to improve what they can quickly and affordably. That means homes which are comfortable and healthy. And also transforming plastic waste from a problem to a solution.

In the UK, our homes generally do have access to all the basic services that these neighbourhoods in Argentina do not. But that doesn’t mean that we can all afford to use them. Ducha de Sol have proven that solar power can be for everyone.