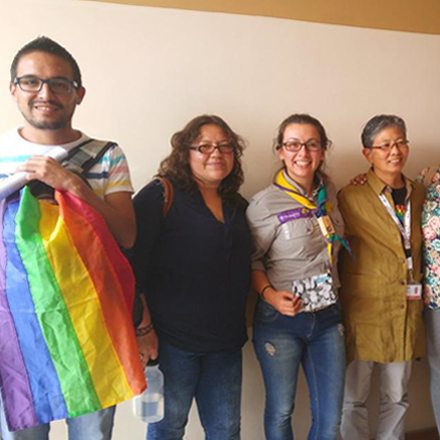 After months of discussions, reviews and amendments, the New Urban Agenda was agreed at the Habitat III conference organised by United Nations (UN) in Quito, Ecuador.  The New Urban Agenda states that cities should adopt an inclusive approach that embraces diversity.  In fact, the word ‘inclusive’ features 36 times.

Yet – a vacuum is left by an important omission.  Despite other forms of discrimination against minority groups being mentioned and condemned, the New Urban Agenda doesn’t make any provision for protection and enforcement of Lesbian, Gay, Bisexual, Trans*[1]  +[2] (LGBT+)  rights in our urban future.

This item was brought up in the formulation of the Agenda.  But a group of 17 countries spearheaded by Belarus (plus Russia, Egypt, Qatar, Indonesia, Pakistan, Bangladesh, Malaysia, Nigeria, Saudi Arabia, Somalia and Iran) opposed and successfully blocked the inclusion of LGBT+ rights in the Agenda, which is supposed to guide global urban development for the next 20 years.  This happened despite numerous efforts from the European Union, Canada, the United States, Mexico, Argentina and Colombia and other countries to secure its inclusion.

It has been argued that LGBT+ rights can still be enforced and pursued under the idea of ‘inclusive cities’ – but individuals and organisations have stated  that the LGBT+ community deserve a much stronger degree of acknowledgement and protection.

Habitat III included a handful of events that focused on Gender and Sexual Minorities[3] and their right to the city.

In particular, a North American-led panel event called on fellow UN member states to include LGBT+ rights in the implementation of the New Urban Agenda.  Ellen Woodsworth, chairperson of Women Transforming Cities International, also called for the public to sign the Queer Declaration – a petition created to highlight the hardship faced by Gender and Sexual Minorities, and urging for the revision of the New Urban Agenda document.

In fact, despite differences between countries, what can be said to be universal is the fact that LGBT+ minorities do not benefit from the same privileges as non-LGBT people.  This affects aspects such as safety, income levels, mental and physical health, access to housing and other essential services.

Ada Colau, Mayor of Barcelona, said, “It is a matter of human rights, and a democratic urban agenda can’t exist without LGBT groups.”[4]

There are two other discussions that were touched upon at Habitat III, although I personally believe they deserve more attention.

The first one is the idea that LGBT+ groups don’t just need ‘protection’, or the safety and freedom to live without fear of death and harassment.  What many LGBT+ people also want is inclusion in decision making.

Gender and Sexual Minorities should have the capacity to embrace the ambition of having the power to shape places.  To be part of making sure cities respond to their needs.  To contribute to building a future which is inclusive, diverse and respectful.  For this to happen anti-discrimination laws and their enforcement have to be in place but there has to also be a recognition of LGBT+ people as having a key role to play in change and progress.

This implies LGBT+ people being able to take up decision making roles, and being consulted when spaces, policies, and strategies are being planned and designed.

The second point I’d like to bring up, which was very eloquently presented by Sherwin Modeste of Toronto Housing at Habitat III, is the recognition of extreme diversity and intersectionality within the LGBT+ community.  Some people are faced with more significant vulnerabilities than others – for example, in terms of being confronted with poverty, belonging to racial or religious minorities, having different forms of disability.  Some Gender and Sexual Minorities are subject to stronger degrees of discrimination and violence than others, with Trans* and non-binary communities being particularly affected.  At times, victories in achieving LGBT+ rights are seen to have widespread benefits to all Gender and Sexual Minorities, but in fact they are often designed and pushed forward by the more influential and secure LGBT+ people.  Not all LGBT+ voices end up being heard, and certain needs and views remain unaddressed.

Modeste mentioned certain groups facing hardship might find themselves in circumstances where they cannot afford to be outspoken activists, and that there must be an effort by LGBT+ groups to find safe ways for them to not be neglected.

In addition, since we are talking about a global context, it is important to note that the Western LGBT+ culture and terminology does not necessarily reflect the experience and understanding of Gender and Sexual Minorities across the globe.  Western LGBT+ discourses might erase the needs and identities of those that do not feel represented by this.

In conclusion, I believe that we need to not only strive for safe and inclusive cities for everyone – without leaving behind LGBT+ people, and ensure that their rights are included in the implementation of the New Urban Agenda.  We also need to guarantee LGBT+ people are empowered to reach their potential and be fully part of the urban fabric.  What is more, culturally aware and inclusive ways of fighting for the rights of Gender and Sexual Minorities globally have to be focused on, along with providing platforms for minorities and vulnerable groups to speak out and voice their views.

[1] Trans: (1) A person who lives as a member of a gender other than that expected based on sex assigned at birth. (2) An umbrella term covering a range of identities that transgress socially defined gender norms.  Trans with an * is often used to indicate that you are referring to the larger group nature of the term.

[3] Gender and Sexual Minorities: umbrella terms for all people who have a non-normative gender or sexuality, synonym for LGBT+ or Queer