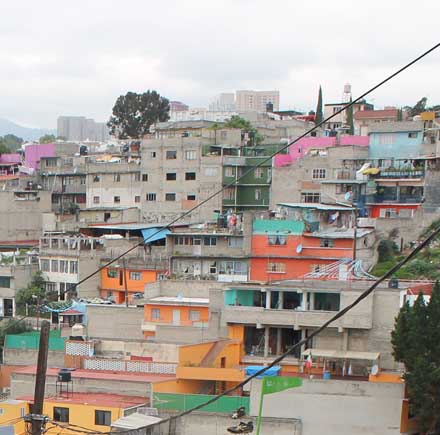 I’ve worked in urbanism for the last 10 years, but I’m still surprised by the disproportionate attention paid by urbanists and housing professionals on urban inequality and informality. All too often I find myself coming out of conferences of planners wondering who urbanism is for. Most of the time I am one of the only anthropologists and I always need to justify why I see myself as an urbanist.

Strange, if you consider that global urban growth is concentrated in informal self-organised and mostly self-built settlements. Slum growth has actually outpaced urbanisation per se since 1970. Already today, 1 billion people live in slums. That will double in the next 15 years. And by 2050, it will triple, by then slum dwellers will represent one third of the global population. The challenge is massive.

In many cities, like Rio or Caracas, the formal housing market only responds to 25% of the housing demand. In these same cities, around 100,000 new homes need to be built every year. Ten of thousands of people in all of these cities every year have to find their own housing solutions, mostly in the informal markets.

So when we talk about cities, we need to talk about slums. Slums are the city; they’re not just unattached parts which need to be integrated. According to the Guardian Cities journalist Justin McGuirk, as much as 85% of all housing worldwide is built ‘illegally’. It doesn’t just happen in developing countries, but also in Europe (think of the London phenomenon ‘super-sheds’).

The cities of the future, which is what many urbanism conferences talk about, those cities that grow fastest, are not constructed out of glass and steel, but out of straw, recycled plastic, scrap wood, and bricks made of construction waste. Housing there isn’t built by the building companies, developers and policy makers who attend the conferences, but by people building for themselves.

Slowly, we’re moving towards a paradigm shift in what urbanism is and who it’s for. As urbanists, we’re starting to realise how much ‘urbanism’ is already happening without any architects or planners involved. A social urbanism is emerging: a process that mobilises and strengthens people to improve their habitat and their economic opportunities. It’s a process that puts people first before profit, a process that doesn’t violate human rights and the right to decent housing in the city. It’s emerging, but we need more of it.

At World Habitat, running the World Habitat Awards with UN Habitat, we see social urbanism happening in many places. It’s important to learn from these can-do approaches. Every year we see hundreds of projects of communities coming together to deal with their own housing needs, and governments and planners and urbanists helping them with this. You see that informal practices are starting to ‘trickle up’ and transforming top-down policies.

We’ll be talking about some of these projects, so watch this space.

27 mins ago RT @xapsan: Definitely the highlight from @WUF_UNHabitat has been these special connections beautifully captured by @mattjpix at @habitatvi…

2 hours ago RT @mattjpix: Such a privilege to be part of the media team covering the #CoHabitatNetwork at the @habitatvillage at @WUF_UNHabitat this y…