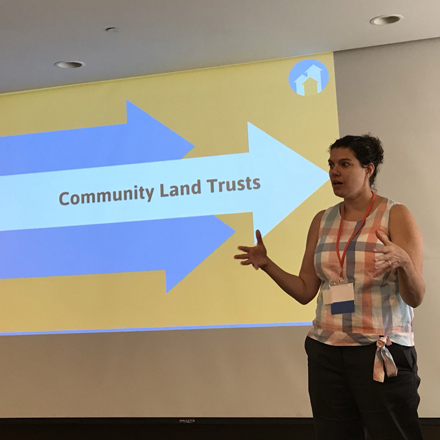 Across different continents, finding (and keeping) affordable, satisfying homes remains a big challenge for many individuals and families. This common battle has nonetheless driven many communities to create or seek out different solutions to make housing and entire neighbourhoods a place to call home.

In early October, over 500 affordable-housing professionals and activists gathered in Pittsburgh, Pennsylvania for Grounded Solutions Network‘s 2018 Intersections conference. This was the largest gathering of Community Land Trusts (CLTs) worldwide.

‘I always look forward to this conference because it brings together people that are passionate about addressing the intense need for the preservation of community-owned and affordable land, and for preventing displacement’ says Robert Burns, Board Chair of Grounded Solutions Network opening the conference. ‘And this year we’ve really raised the conversation on racial equity and diversity and inclusion.’

The conference also served as the North American Hub of the CoHabitat Network, a global Network that believes in community-led housing as a solution to the housing and affordability crisis, and as a model for developing cities.

‘The Network creates a vital space to gather organisations and federations that work on different types of community-led housing from across the world, and their allies’ says Bea Varnai, urbaMonde (the Network facilitators).

One of the roles of CoHabitat is to support learning through peer exchanges and knowledge sharing. This is done, in part, by working with regional partners (such as Grounded Solutions Network and Co-operative Housing International for North America) and co-ordinating or integrating into experience-sharing events and workshops such as Intersections.

As a result, this year, in addition to the wealth of examples, history and experiences that were shared about the US, several international events were hosted at Intersections in connection with the CoHabitat Network. Through these, we heard about collaborative solutions to the global affordable housing crisis.

In particular, the Global Spotlight session showcased important initiatives from around the world that are advancing on landmark projects, policies or partnerships around community-led housing. This highlighted the importance of understanding the wider landscape of people-led solutions, that are happening and evolving globally, such as CLTs, housing co-operatives, community savings.

Hearing about all these different successes ensures that future perspectives seem bright.

In fact, North America[1] certainly has a lot to teach us. It’s home to the roots of the CLT movement, and the US is celebrating 50 years since the creation of the first CLT in Albany, Georgia next year. alongside more recent influential models such as the Champlain Housing Trust and Dudley Street.

Canada has built on its co-operative housing tradition, and has developed supportive policies and its own CLTs, along with being home to some significant projects such as Milton Park Community in Montreal and the recent CLT in British Columbia. It’s encouraging that there’s an appetite for not only sharing these lessons, but also for incorporating new ones from abroad. Intersections also provided a meeting point for the fledgling Canadian CLT Network to get together and coordinate their next steps.

As Hannah Sholder from the Global Land Alliance says: ‘It’s an important shift that we are making in understanding how these issues are global. The gentrification we see in US cities is also happening in cities across the world. So having these experience exchanges helps reinforce that we can learn from each other and build solidarity. This way we can address issues on a larger scale.’

As Bea Varnai said: ‘It’s great to see growing interest by participants from North America in learning about other models, and really seeing their work as part of a wider movement. It’s important to gain an awareness of what the exchange on different models can bring to one’s own movement locally. The idea is to: act locally, but think globally!’

Our work is only starting though. The CoHabitat Network, of which World Habitat is part of, is actively working with local partners on the next regional hubs in Latin America, Asia, Africa, Europe, and North America next year. In addition, the Network is developing tools and strategies to reinforce community-led housing worldwide, including documenting experiences from around the globe. If you’d like to get involved, get in touch through: [email protected]

[1] At the moment, the regional partners from Mexico have integrated the Latin American Hub of the CoHabitat Network. Hence why they are not mentioned here.