Home / News / Our Blog / Conversations on a Belgrade Balcony: Reflections on the past, present and future-housing 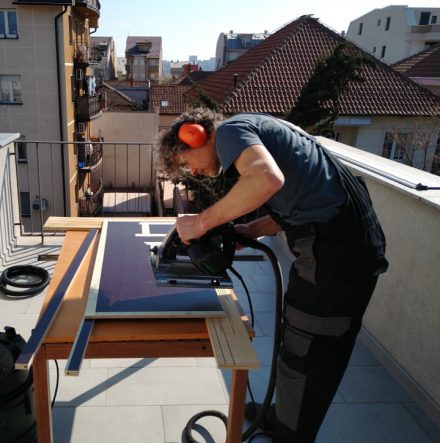 Mariangela Veronesi, Programme Lead for the Global Community-led Housing Programme, blogs about her chat with founders of Pametnija Zgrada – a pioneering housing cooperative from Belgrade – about the local housing context and their aspirations for new resident-led non-speculative housing solutions.

‘I grew up in this house. I can tell you that the view from here today is completely different to from what you would have seen a decade or two ago’.

Ana and I are looking over the rooftops of Belgrade from her balcony as she explains how the urbanscape in front of us tells the story of the city’s development.

I hear how the neighbourhood used to be made up of mostly one- to two-storey family homes surrounded by open space and greenery. ‘Now our garden and our neighbour’s garden are almost the only green spaces left’. And outdoor areas are not the only things disappearing, so are family homes.

The houses that used to be passed down from one generation to the next are nowadays continuously targeted and bought up by developers. Homes are transformed into apartment blocks, and original owners are offered a couple of flats as part of the deal.

This trend started after the break-up of Yugoslavia but has significantly accelerated in recent years – along with a lot more development across the city. In some neighbourhoods, the scale of transformation is incredibly vast. One glance at the mega developments on the waterfront is enough to make anyone’s head spin at the amount of construction, as high-rise structures, surrounded by cranes, dominate the skyline.

‘As you can see, housing is emerging everywhere. And yet, we’re deep in a housing crisis. The new developments do not include affordable options and are in large part driven by speculation. They do not and cannot house people most in need of housing.’

‘What happens to those who cannot afford to buy apartments?’

‘For many the only option is to keep on living with their parents well into their adult lives’. We look across to one of the houses nearby where three generations coexist in an increasingly crowded space.

This shortage of available affordable housing, and the resulting lack of autonomy and quality of life have strongly motivated Ana Džokić and her colleagues to found Pametnija Zgrada – an organisation promoting a new model of non-speculative cooperative housing. Their ambition is to improve housing rights through resident-led long term sustainable solutions which are accessible to individuals and households on lower budgets.

New apartments and family homes are not the only types of buildings you’ll see walking around Serbia’s capital. The presence of huge blocks from the country’s socialist past are difficult to miss and strongly characterise the city’s aesthetic. They form a significant part of the housing stock but are unfortunately mostly poorly maintained.

Marc Neelen is also leading on Pametnija Zgrada’s work in Belgrade. As we pass one of the many apartment blocks that was suddenly privatised in the aftermath of the end of the socialist regime, he explained that this specific block stood out because residents had managed to coordinate and raise funds to implement changes to the building. ‘This is really rare in Belgrade because most of these blocks have no system to take care of the building’s envelop and communal areas.’ Collective management and resident leadership are indeed largely unknown in Serbia, but Marc and Ana feel they are important tools to produce housing that fit resident’s needs.

There is a lot of work ahead in terms of building community and institutional understanding of cooperative housing solutions, developing the right financial mechanisms and products to fund pilot projects, and to secure land for the first emerging initiatives. However, Pametnija Zgrada has made important steps forward in developing their model and their strategies and is not alone in this endeavour. They are in fact part of MOBA Housing SCE – a network of similar organisations from across Central and South-Eastern Europe which are also developing housing cooperatives in their countries. Together, they have developed a set of tools, funding mechanisms and pieces of research to increase the network’s capacity to support cooperative housing development in the region.

As we leave the balcony, I cannot help but take a last glance at the landscape around me. One day the view will not only include the last remaining family homes, some brand-new apartments, and socialist-era buildings, but we’ll also see a whole set of housing cooperatives that are developed and managed by its residents. With this vision in mind, we pick up our things, and Ana, Marc and I head towards the MOBA meeting awaiting us so we can keep working towards making this dream come true.

15 hours ago 📢🌟We are recruiting🌟 This is a great new job opportunity to for a dynamic HR & Facilities Officer who will support… https://t.co/Bw8b8GS5Cc

15 hours ago RT @AnnaKateJay: I am delighted to have had the opportunity to work with @WorldHabitat's amazing Board and Team, leading the search for new…

15 hours ago RT @Saba_Salman: On: >#HumanRights >what's possible >responding to #inequality #poverty by adapting policy/practice And the bit on 'the in…