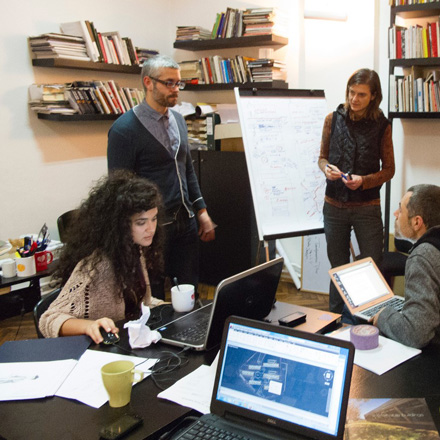 Ana Džokić is a member of the association Ko Gradi Grad (Who Builds the City) in Belgrade, who are the initiators of Pametnija Zgrada (Smarter Building) – a new kind of collectively owned housing co-operative in Serbia.

For those who walk the streets of Belgrade, construction frenzy is a usual sight – from smaller-scale developments at sites of former modest free-standing houses, to demolished privatised industrial complexes, to vast swaths of public land along the waterfront where high-rises claim prime view of the city. Following the financial crisis, the last few years have also brought a sizeable annual increase in real estate prices – 18% in 2016, 5% in 2017 and 12% in 2018. You might think that things are going well, but the question is – for whom?

Although statistics may sound ‘nerdy’, they help us understand the growing divide. According to recent Eurostat data, Serbia scores the second-lowest in housing affordability in Europe, with only 1.9% of households free from financial burden due to housing costs. At the same time, the average citizen of Belgrade needs 20.4 years of entire income for 60m2 of a newly built apartment. While more than one-in-three (34.6%) homes are overcrowded, over 100,000 apartments in Belgrade stand empty. In addition, only a select one-in-20 (5%) of the population buys real estate and yet, more than four-in-every five (82%) apartments sold in Belgrade are bought in cash! It’s clear that the ongoing construction boom provides no widespread solution. It only boosts speculation and eats up valuable urban land, much needed for other housing options.

In 2012 when Ko Gradi Grad (Who Builds the City) started to figure out how, in Belgrade, housing can be made possible for those who cannot acquire it under the current market conditions, little did we know about the path we would take. We started with an open call that read:

“Are you interested in building a decent apartment somewhere in Belgrade at 300-400-500 euro/m2? Impossible? For the majority of people getting an apartment at these prices is the only reasonable option – without getting yourself into debt and unpayable loans, living in impossible conditions or waiting for your relatives to move to the countryside or Heaven. Who, why and how can this impossible be made possible?”

Over the next two years, a number of open discussions resulted in us starting the process to form a housing co-operative. In a society where private ownership (98.3% since the early 1990s) is practically the only way to resolve housing needs, and social housing is sporadic (under 1%), picking the housing challenge apart becomes the first task.

Step by step, the group questioned the seemingly inescapable norms of how “housing works”. We dissected its cost, questioned individual ownership and profit-making, explored forms of collective finance and shared aspects of living, and imagined new possibilities that might introduce the notion of equality into a society largely based on inequality – a collective stance has now taken shape.

Even so, we were isolated, and in an environment where collective action has disappeared as a viable horizon for change. We understood it’s essential to start building alliances. From bringing together various housing activists and groups, commenting on the new housing law, awareness campaigns, and involvement in forming an anti-eviction and right to housing collective – in Belgrade, today, housing issues have the public’s attention.

At the start of 2019, we finally established the first housing co-operative in nearly 20 years in Belgrade – Pametnija Zgrada (Smarter Building). We are now preparing a pilot project for about 50 people, with about 20 housing units and collective space. What makes it the first of its kind in Serbia are the principles of mutual homeownership and taking housing off the market, while being affordable (at about 60% of current market rent) and even remarkably energy efficient – to keep living costs low in the long term. The pilot project naturally serves as a stepping-stone for other projects to come.

Without proper governmental embedding, the challenges ahead remain significant. Affordability is challenged by unfavourable taxation for collective ownership, and unsustainably low energy prices undercut low energy measures. Nevertheless, the most significant endeavour ahead is how to get affordable finance or institutions that would provide capital to housing co-operatives. Consequently, in 2017, we were excited to meet several other pioneering groups from cities in the region facing very similar issues. Soon we would form MOBA Housing Network. This exciting path we took together allowed us to acquire the skills to enter into negotiations with lenders and gain expertise in figuring out finance – we even developed an open-source calculation tool called OpenFRM.

Now, two years later, we are together forming a legal entity – a financial instrument of sorts – that will include a collective investment fund to kick-start co-operatively owned housing projects. Throughout history, such funds have been crucial for the co-operative movement. With MOBA we are looking forward to collaborating with long-existing, successful co-operatives from other parts of Europe. In the still unwelcoming contexts in Central and South-Eastern Europe, and certainly in Belgrade, such funds might bring a breakthrough for non-speculative mutual homeownership.

14 hours ago 📢🌟We are recruiting🌟 This is a great new job opportunity to for a dynamic HR & Facilities Officer who will support… https://t.co/Bw8b8GS5Cc

15 hours ago RT @AnnaKateJay: I am delighted to have had the opportunity to work with @WorldHabitat's amazing Board and Team, leading the search for new…

15 hours ago RT @Saba_Salman: On: >#HumanRights >what's possible >responding to #inequality #poverty by adapting policy/practice And the bit on 'the in…