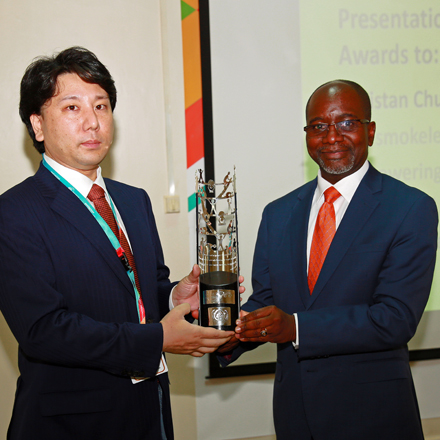 The 2018 World Habitat Awards were officially presented to the winners at the UN-Habitat First General Assembly in Nairobi this week.

The awards, run in partnership with UN-Habitat, were presented by Mr Victor Kisob, the Deputy Executive Director at UN-Habitat, to the two winners – Little Ones of Japan and Heritage Foundation Pakistan.

“I am proud to present the World Habitat Awards trophies this year – the two World Habitat Awards 2018 winners are an inspiration for many. They illustrate how housing innovations, inclusion and empowerment can change lives, and contribute to families and communities, well-being in cities, and human settlements. Your achievements are an inspiration to lead our work at UN-Habitat, towards the realisation of the New Urban Agenda and SDG 11.

“I would like to take this opportunity to thank our partners from World Habitat and the Special Rapporteur on the Right to Housing, Ms. Leilani Farha, for their continued support in the implementation of the New Urban Agenda, and for their contribution to make this first UN-Habitat Assembly a success.”

Receiving the awards were Founder and CEO of Little Ones, Kuni Koyama, and Mr. Syed Ahmed Maroof, Acting High Commissioner/Acting Permanent Representative of Pakistan, in Nairobi, on behalf of Heritage Foundation. Yasmeen Lari, the Founder of Heritage Foundation, joined the event by video message, as did World Habitat Awards Judge, Leilani Farha.

We were pleased to be joined at the event by Rose Molokoane, co-ordinator of the South African Federation of the Urban Poor (FEDUP), and a member of the Management Committee of Slum Dwellers International (SDI). Rose closed the event by congratulating the winners for their significant work; and she explored the challenges ahead and the opportunities she believes we must seize to ensure safe and secure housing for all.

21 hours ago RT @insidehousing: Homeownership must not come at the expense of the poorest households, says CIH president https://t.co/4yYFHdgD5v #ukhous…

1 day ago RT @ThePlanetMark: On #NetZeroWeek we look back at our conversation with Ross Wilson from @IngramValleyGB, a Planet Mark certified farm in…

1 day ago RT @SolutionHousing: The recording from our session "Relationship between housing policy strategy and the reality of social work" at #ISHF…