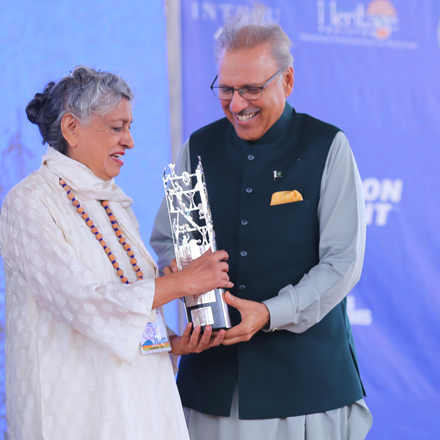 Heritage Foundation of Pakistan were officially presented with their 2018 World Habitat Award by the President of Pakistan Dr Arif Alvi at a recent event at the Zero Carbon Cultural Centre near Makli in Pakistan. The Award is for their Pakistan Chulah project that has transformed the lives of hundreds of thousands of rural families across the country.

As part of the project, marginalised women are taught to build a hygienic, sustainable, smokeless earthen stove, which not only improves their health but also empowers them to earn a living by marketing and building stoves in other villages.

The award presentation was part of the official opening of a new Training and Resource Centre – funded by INTBAU and the Prince of Wales Charitable Fund – for Pakistani students to study zero carbon building techniques. This new Centre is part of ZC3 – the Zero Carbon Cultural Centre for marginalised communities across Pakistan.

Three-hundred of the women who have helped others to build Chulah stoves, and those who have benefited from them, were also at the event. The trophy is to be taken to around 150 villages across the Sindh Province to demonstrate the international significance of this innovative project.

“It was an honour and a privilege to meet the women who built these stoves and made other transformational changes to the lives of so many people in such remote and undeveloped parts of Pakistan. The approach is a lesson to the world on how development needs to work. It uses the skills people already have and creates new social entrepreneurs to drive improvements that don’t consume more resources or emit more CO2.”

3 hours ago RT @PatrickDuce: How do we frame the climate emergency and homelessness in the same conversation and with the same urgency? How can we av…