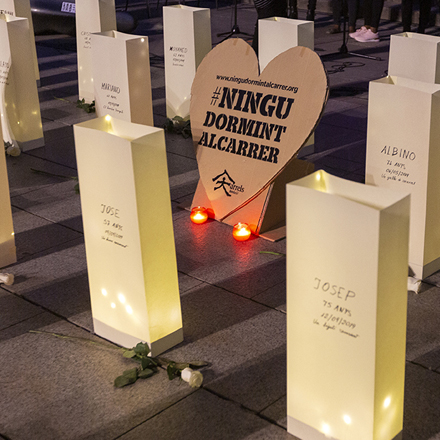 To address the growing challenge of street homelessness in Barcelona – including the increasing vulnerability of those who have been homeless for longer than six months – local NGO Arrels Fundació are calling for a number of initiatives to be introduced.

These initiatives include:
• opening small, specialised spaces for specific groups, such as women, LGBTQ+ people, those with pets, people with addictions and people with mental health issues;
• the right to housing as a starting point – including more facilities to help people experiencing homelessness access social housing and increased public-private collaboration to expand the number of Housing First homes in the city;
• a more connected, supportive system for those leaving prison, being discharged from hospital, and leaving child social care; and
• ensuring that homeless people supported during the COVID-19 public health emergency do not return to the street.

Evidence gathered over the last four years indicates that if you are street homeless for more than six months – which the majority are – your chances of deteriorating mental and physical health, and your risk of abuse and violence, more than double.

Arrels – lead partner for the European End Street Homelessness Campaign in Barcelona – are taking immediate action to increase and strengthen their street outreach teams, are opening more accommodation, improving the advice available for the general public around rough sleeping, and using robust data to influence both policy and practice.

Arrels have outlined their findings and proposals in a new report, ‘Viure al carrer a Barcelona. Radiografia d’una ciutat sense llar’ (Living on the streets in Barcelona. An x-ray of a homeless city).

The report – funded by World Habitat’s Innovation Grant – gives an in-depth analysis of homelessness in Barcelona, where over half of those living on the streets have been there for over a year, and there is a wait of over six-months for emergency hostel accommodation. With the added challenge of COVID-19, the limited resources available and the restrictive policies that, for example, prevent migrants from accessing support, have made the harsh reality of street homelessness even more stark.

“The solution is prevention and housing. Until that answer arrives, we must seek solutions that minimise people’s suffering. And, of course, solve the causes that force people to live on the street.”

Juan Verdón, who has lived on the streets for 15 years, said:

“Violence is common. Mostly it’s verbal and there is also pure and simple aggression, like someone who mistreats women, just for the sake of hurting them. Because, if I’m sleeping on the street, what harm am I doing? Why are you coming and bothering me?”

“There is a gap in services for women experiencing street homelessness. On the one hand, the homelessness network is very masculine and so has a lack of specific attention towards women. On the other hand, women’s resources do not adapt to the reality of women living on the streets.”

“The longer you live on the street, the less chance you have to leave. You don’t have a job, you don’t have a stable home, you lose your self-esteem and confidence…When six months have passed, you no longer consider it a temporary situation.”

“A single day living on the streets is already an unacceptable injustice and violation of rights. But, as this report details, from six months on there is an alarming and unacceptable increase in people’s vulnerability. This not only includes a deterioration in physical and mental health but also a heightened risk of both physical and verbal abuse. We support Arrels in their call for measures to address this urgent situation.”

The evidence for this report has been gathered over the last four years during Connections Weeks – when volunteers meet and talk to those sleeping on the streets, to understand their experiences and needs. Between 2016 and 2019 over 1,400 homeless people and 1,400 volunteers participated. The understanding gained through the collection of this data is essential to promoting policies and creating resources that are adapted to the realities of those sleeping on the streets.