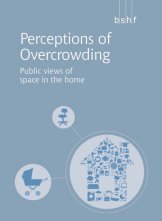 A key element of decent housing is that it should be large enough for the household. A range of different standards for defining overcrowding and space requirements in the home are in use in Britain today, but the underlying assumptions are rarely validated against public views. This research suggests that the standards fall well below public expectations, particularly for some household types. As a result, official estimates are likely to be underestimating the scale of the problem with overcrowding.

The standards used in Britain to assess levels of overcrowding and housing space need do not match public expectations.

Researcher Rachel Moreton held focus groups with people from different backgrounds across the East Midlands to find out how much space they thought was needed in the home for a minimum standard of living in Britain today.

The findings, published in ‘Perceptions of Overcrowding: Public views of space in the home’ highlight, for example, that:

It is widely accepted that the legal definition of overcrowding, introduced in the 1930s, is outdated. The bedroom standard, which was developed in the 1960s, is now widely used to assess levels of overcrowding and to prioritise households needing of re-housing. This research suggests the bedroom standard may also need revising in light of changing living patterns and public expectations. In addition, no specific standards are in place to assess floor space requirements in homes in Britain.

The report outlines a series of recommendations, the most significant of which is that The Department for Communities and Local Government and the Scottish and Welsh Governments should introduce a new statutory overcrowding measure that reflects public perceptions of minimum space standards.

Left Out: Why many LGBTQ+ people aren’t accessing their right to housing in the UK

Adding Life to Years: New Ideas and Attitudes to Housing for Older People

Thanks for downloading our publication!

If you’d like to keep up-to-date with the latest World Habitat news and events, why not sign up to our newsletter? Just enter your email address below.

Thanks, you have subscribed to the World Habitat Newsletter.