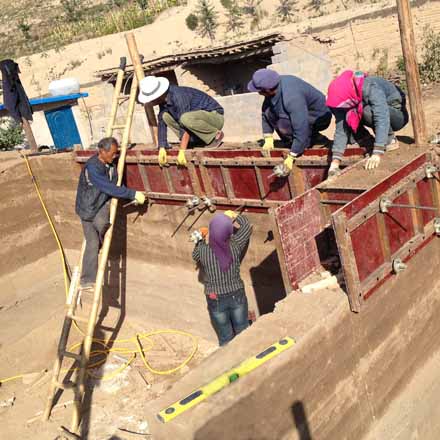 A radical project which challenges China’s modern construction methods with a new model that advances traditional rammed-earth building techniques has today been named a Bronze Award Winner in this year’s World Habitat Awards.

Building with EARTH has promoted advanced earth construction in rural communities, through training local craftspeople and working alongside academics and government officials. The result is a cheaper, more environmentally sustainable and more earthquake-resistant alternative to current building methods.

The project began in 2011 in Macha Village, Gansu Province, with the construction of a Village Centre and 32 prototype houses. Since then, the model has transferred to 23 different regions across 17 provinces. Around 655 villagers are already living in new earthen homes and the project aims to have housed 1,636 people by the end of 2020.

The project – which is transforming the lives of rural communities – is co-ordinated by Wu Zhi Qiao (Bridge to China) Charitable Foundation (WZQCF); delivered by Beijing University of Civil Engineering and Architecture (BUCEA) and Xi’an University of Architecture and Technology (XUAUT); and supported by the Ministry of Housing and Urban-Rural Development of China (MOHURD).

Resident Yue Zengwu, aged 72, lives in Macha Village and became the first owner of a prototype house. He said: “My wife has mental health problems and she can only stay at home. One of my sons became half-blind at his young age. I am the only one who works and takes care of the family. I felt so thankful that I was chosen by the village to be the beneficiary family subject to my difficult conditions. I have now lived in our new home for seven years. It’s comfortable. We stayed cool in summer and warm in winter. We could simply just warm the house with our bed stove and stay warm in chilling winter!  It saved us so much money. This is a total transformation for me and my family.”

The World Habitat Awards judging panel said: “This project is a great example of using earth as a building material, with extremely interesting partnerships between students, officials, villagers and architects. These homes are the best in town, which can contribute to changing the mindset that earth homes are only for ‘the poor’.”