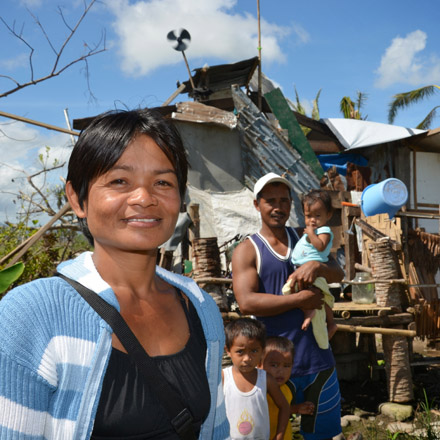 After Typhoon Haiyan, the most powerful in history, devastated large areas of the Philippines in 2013, CARE Philippines helped over 15,500 families to rebuild their homes and is a winner of this year’s World Habitat Awards.

Post-Haiyan Self-Recovery Housing helped families to self-recover after the widespread devastation of Typhoon Haiyan. Instead of relocating families, the project helped people rebuild their homes using locally available materials and debris from destroyed houses. This means fewer families were relocated and they have gained useful skills, as well as enabling people to be reached and helped more quickly.

Support for ‘self-recovery’ is an approach that could reach a much greater scale. Combining basic guidance, simple tools and resources allows humanitarian agencies to help more people. It makes the most of natural human resilience and enables people to take charge of their own recovery.

Minet, the Executive Director of Leyte Center for Development, one of the organisations who assisted CARE Philippines, said:

“CARE Philippines approached us and asked if we would help them to reach the survivors who were in a worse condition than us. We agreed and actually being able to do something positive in such a negative situation was so empowering. I had worked in this area for 30 years. But after Haiyan came I wanted to leave – I didn’t know if I could manage the sacrifice. We didn’t have water or electricity but my colleagues decided not to leave. So it would be so embarrassing if I left. My family wanted me to leave. But my colleagues and I decided to stay and help.”

“We have breadth and we have reach. We had an established network already so we could assist in the delivery of CARE’s toolkits and help. We already knew the communities and we had the contacts so we could reach them. This made it quicker and easier to help people in remote places. This enabled people to rebuild their lives quickly and as safely as possible. We were able to help CARE reach remote rural areas so people had access to the shelter kits and advice they needed to build back their houses to be more resilient and establish ways they could generate income such as through growing and selling rice.”

David Ireland, Director of World Habitat, funders and co-ordinators of the World Habitat Awards, said: “CARE Philippines have helped thousands of people to rebuild their lives and their homes quickly. This is the first time self-recovery has been used on such a large scale. It has helped more people more quickly than traditional disaster recovery programmes. The potential of this approach to be used elsewhere is absolutely huge.”