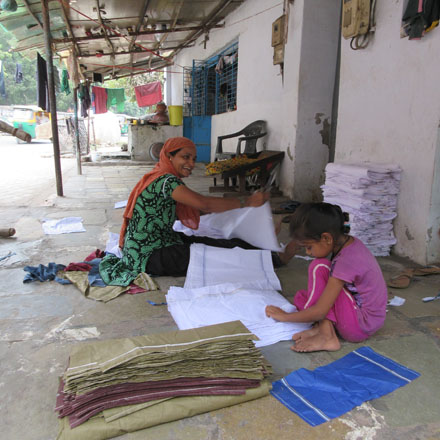 A scheme providing self-employed women in India with simple adaptations in their homes to improve lighting and ventilation has received a ‘Special Mention’ as one of the finalists in this year’s World Habitat Awards.

Bringing light and air to homes in informal settlements has vastly improved conditions in over 18,000 households across seven states. A specially designed dormer window that fits onto corrugated roofs used on most informally built homes lets light and ventilation into previously dark and hot rooms. They are made available through affordable loans.

Because natural light and air flow increases, the need for electric lighting and fans is significantly reduced. This leads to reduced living costs and increased productivity, meaning people can pay back the loan they took out to pay for the adaptations with the savings they make.

Paliben Jayantibhai Pattni, who lives with her family of six and works at home stitching clothing, said:

“It used to be very difficult to work at home. To do stitching jobs I had to use tube lighting even during the daytime. The electricity bill was very expensive.  Now with improved natural light and ventilation, I can do most of my work without having to use tube lighting. I can work in a more comfortable environment.  My income has increased and I have been able to save money in my pension and savings account.”

David Ireland, Director of World Habitat, funders and co-ordinators of the World Habitat Awards, said: “This project solves a genuine problem – improving both living and working conditions for women. The way in which they administer micro-loans to people on very low incomes is impressive.”

16 hours ago 🌟Weekend Viewing🌟 The replay of the highly acclaimed 'Social Housing and Housing First as a solution to eradicate… https://t.co/wGfb8RfG4P