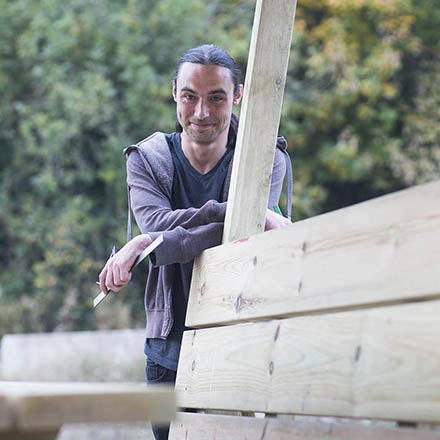 With the help of Turner Prize-winning architects Assemble, a local land trust group in Hastings, England is planning an ambitious project to help the community to build its own houses on the long-derelict site of the old Hastings power station.

Heart of Hastings Community Land Trust (CLT), a community benefit society managed by a dedicated group of local people determined to rejuvenate the town, is focused on creating housing that is owned and managed by the community, and affordable for residents in the long term. They also see that rapidly rising rents in the town threaten the affordability and diversity of the town and its population, and their work aims to significantly change this.

Some of the group were involved in the successful rebuild of Hastings Pier after it burnt down, raising the £14m required to carry out the two-year project, which opened in April 2016. The focus on ensuring the new pier was a central part of the neighbourhood then sparked discussions about how the neighbourhood could be a better connected part of the pier. Jess Steele OBE, a Heart of Hastings CLT Director and a trustee on the Hastings Pier group, said that in the town “price rises were beginning to worry us so we held a series of public meetings to ask whether gentrification was taking place, whether it was a problem and, if so, what we could do about it. Though there are economic benefits, rising prices displace less well-off people, the main contributors to making the neighbourhood creative, diverse and interesting.”

To begin to tackle this problem, the newly-formed CLT first took on the successful redevelopment of Rock House, a disused office building in the White Rock area of Hastings, and a building that would have posed many problems for commercial developers. It now offers a vibrant mixed-use space for small businesses and residents, with affordable rents capped for the long term that are linked to local incomes.

Rock House has transformed life for Bob Williams, 61, a resident there for four months, and he sees similar schemes as the future for urban communities. “I came to Hastings four years ago to care for my mother who was ill and for a better quality of life”, said Bob. “When I also became ill myself and found myself needing to secure accommodation it was a heartbreaking and dispiriting process. Probably 1% of the housing in Hastings is affordable for a single person but it is on the whole of very poor quality. My life was completely on hold.”

“Having the opportunity to move to Rock House has made a world of difference to me personally”, said Bob. “It’s great for the neighbourhood. I can start doing other things, engaging with and contributing to the community.”

At Rock House, there is no building manager, in the spirit of the community that has been created, tenants take on the shared responsibilities, something that also appeals greatly to Bob. “It’s like a vertical village with no great separation, a proper community where people feel like they have a stake. I would absolutely recommend this to anyone.”

Alongside a process now underway to seek community investment for collective purchase of further residential property to develop affordable housing in the White Rock area of town, through a share offer to be launched at an event on 9 December, the CLT’s successful work with Rock House has acted as a ‘pathfinder’ for their next, even more ambitious venture. They plan an innovative and substantial community build housing project on the site of the old Hastings power station in the nearby Ore Valley area, which is not only the poorest part of Hastings but also in the poorest 1% of areas in England. The area suffered badly from post-industrial isolation when the power station suffered a fire in 2000 and was then demolished in 2003.

Tania Charman, a member of the CLT’s board, long-time local resident and councillor for Old Hastings and Tressell, emphasises that the plan, which would enable members of the community to collectively build and own new housing on the site, is “a people’s project, an opportunity to have some control for ourselves, in our own future, our security.” At this early stage the group are, Tania says, encouraging people interested in helping to revitalise the local neighbourhood to “get involved and have a say, help inform the plans and policies.”

In addition to providing housing opportunity for those in need, the project aims “to employ local people, possibly people who have been long-term unemployed, helping them to gain skills, take on apprenticeships”, said Rodney Buse, a CLT specialist on the Board. “There are also many people who like the idea of having a small business on the site, contributing to the work, there could be half a dozen or more. We could also see a local contractor providing food for the site during the build, and perhaps working with the neighbouring college on developing skills. If it works as we all believe it will, it becomes a model that can be replicated.”

Daniel O’Connor, who grew up in Ore Valley, is lead volunteer for the project. “I’ve seen the power station go from useless relic to dangerous eyesore and then ignored waste ground. I’m excited by the possibilities that the CLT project can bring, greatly benefiting local people.” Having been long-term unemployed, the benefit of being involved with the project, Daniel says, “has been massive. I’ve gained skills and found purpose working with good people on a project I believe in. I’ve grown in confidence, my physical and mental health have improved, and I feel a part of my community.”

Hastings resident Jonny Ladd, 43, is involved with the CLT as manager of the old power station site. Currently helping to organise neighbourhood events and get local people involved with and discussing ideas for the site, he’s enthusiastic about the huge potential for the community. “The affordable housing will be crucial to the valley, also giving local people the chance to learn new skills through the build.” Already mentoring the construction of several wooden seating pods, Jonny continued, “It’s very rewarding to pass on my woodworking and design skills to volunteers working on the site, and to see the new friendships that are being created in the community.”

The Ore Valley project has captured the interest of Assemble, the architects behind the 2015 Turner Prize-winning Granby Four Streets CLT development of housing in a deprived area of Liverpool. As design advisers for the project Assemble will “help us to design a future for another very poor part of the country”, says Jess Steele.

“This site, fenced off for years, has the potential to really unite this community, it really is the heart of the valley”, says Tania Charman. “I’ve learnt a lot, it’s amazing. I’d say to anyone who wants to get involved, you won’t believe what you’ll learn as part of the project, there’s a ‘wow’ moment every week.”

The group are currently focused on seeking input from members of the community about the project, and working on planning and funding matters, a phase which they think will last until April 2018. A twelve-week ‘organisation workshop’ (OW) process would then take place to build a practice house. Much is yet to be decided through community involvement, though it is envisaged that a builders’ co-operative could then be formed from the participants to carry out work on the other properties, or to be involved with a professional construction company, using all of the skills and organisation generated, which the CLT estimates will take a further two years or more.