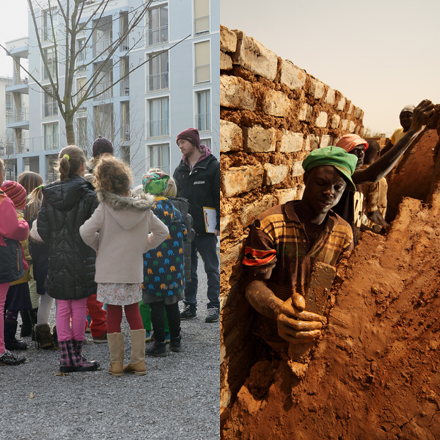 The world’s leading housing awards have chosen two housing projects that have the answers to issues affecting people across the globe. These world beating solutions have won the World Habitat Awards 2016-17 run by the Building and Social Housing Foundation with the support of UN-Habitat.

One of the two winners is ‘A Roof, A Skill, A Market’ (Nubian Vaults). Across five West African countries in the Sahel hundreds of local people are being trained to create vaulted roofs using sun-dried mud bricks. This technique replaces unsuitable materials often used for housing and has resulted in over 2000 homes now being more affordable and comfortable.

David Ireland, Director of World Habitat, funders and co-ordinators of the World Habitat Awards, said of the project: “The Sahel is a region under extreme pressure from climate change, conflict and grinding poverty. Nubian vaults provide a far better way for people to live in this fragile region for little cost and virtually no environmental impact. ”

The other winner is ‘More than Housing’ in Switzerland. This is one of the largest and most ambitious cooperative housing projects in Europe resulting from the collaboration of more than 50 different cooperatives which led to the development of thirteen environmentally friendly buildings. This socially diverse community live in 400 housing units and have access to facilities such as retail units, meeting areas and large shared spaces. Residents can have their say in where internal funds are spent and future developments of the area.

David Ireland explains: “It’s inspiring to see that cooperative housing can be this good. Wide airy stairwells are meeting places where neighbours talk; shops are let on the basis of what the community wants not who just can afford the rent. This project is successful in being a home to a community not a stockpile of individual dwellings.”

World Habitat Awards judge, Dr Joan Clos, UN-Habitat Executive Director adds: “Housing affordability is becoming one of the most important problems worldwide, both in the developed and the developing world. “More than Housing”, located in the city of Zurich, is innovative in its pursuit of affordable and sustainable housing. The project is led by the people living there and addresses the challenges of urbanization including climate change, mobility and energy consumption. ”

For further information about the awards please visit www.worldhabitatawards.org