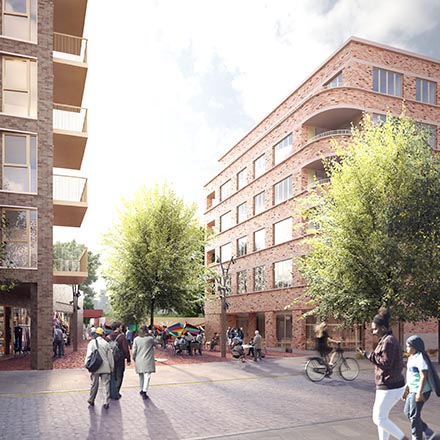 With housing costs freezing out local residents, Brixton Green, a not-for-profit society created by passionate local people, working alongside Lambeth Council, is moving full steam ahead towards construction of 304 new community-led rented homes in the capital, of which 121 will be let at social rent levels.

The housing crisis taking hold across the UK is no more sharply in focus than on the streets of London, with a recent poll carried out for Guardian Cities and The Observer suggesting that of all current issues, housing is the most important for those who live in the UK capital. Ever-increasing house prices and rents show no signs of slowing, further widening the gap between local incomes and housing costs, plunging increasing numbers of people into an unstable and uncertain future.

Many have taken to those streets in protest against the conditions that have led to the housing crisis, calling for urgent action. But the movement for change is about more than just protest as among them are ever-more groups of dissatisfied and determined local people taking matters into their own hands to make a difference to their communities. Dedicating an incredible amount of time, skill and effort they’re coming together to plan, manage and deliver truly affordable community-led housing solutions themselves, in a variety of ingenious and pioneering ways.

Among those leading the way are Brixton Green, a non-profit community benefit society driven by a group of hugely spirited resident volunteers. In December 2015, following many years of persistent lobbying, the group was granted permission by Lambeth Council for the development of a chefs’ school, a nursery, local shops, a community hub, a new home for a community theatre, the Ovalhouse Theatre, and 304 new homes on Somerleyton Road, all for rent with a local lettings policy proposed, and all the homes built to the same good quality. It is planned that 40 per cent of homes will be at low-cost rent at council levels, 50 per cent will be ‘affordable homes’ as defined by the government, different rent levels will be distributed evenly around the development, avoiding ‘poor doors’ and at least 60 homes will be reserved for older people.

Dinah Roake is currently a co-opted trustee and vice chair of the Brixton Green group and joined in 2010. She recalls, “It all began in 2008-09, when a group of people convened and decided that the only way the ambitions in the Brixton Masterplan could truly be delivered was if they had control over the land. Somerleyton Road grabbed their attention as it was partially owned by Lambeth Council, and the private owner of the other part was keen to be involved in the Brixton Green project too.”

Rather than a private developer delivering the project, Brixton Green encouraged Lambeth Council to develop the site themselves. Overall, Dinah said, the priority is “maintaining good quality of life and efficient, low-cost housing.”

This follows seven years of tireless voluntary work to raise the profile of the project and encourage local involvement. The brief and range of uses was written by the community through intensive local engagement, which happened early before designers were introduced to the scheme, accelerating the design process. The society can now call on a membership group more than 1,200 people strong and a core team working hard on a voluntary basis to bring the vision to life.

“What makes Brixton Green stand out as a model is that it doesn’t need any subsidy as it’s internally self-financing,” said Dinah. “The project follows a simple approach at this scale, which should work across the capital – indeed in any urban environment where more than 60% of the population are renting. Community-led housing schemes like this one are vital; if in a self-contained project we can also provide 121 homes at social rents and the necessary mechanisms and support were available to support this activity, there is a great opportunity to replicate the model elsewhere to help tackle a large proportion of London’s housing problems.”

Another innovation in the scheme is the requirement for complete consistency of design and standards between all rent levels. This gives the landlord the ability to switch rental levels on different flats, for example, moving families to larger flats within the scheme to adapt to changes in tenants’ life circumstances and incomes, while maintaining an overall mix of at least 50% affordable housing.

Brixton Green’s ambition is for a new charitable Trust to be set up to lease the whole development and to be the landlord, established on cooperative principles, with clear accountability and membership, with founding directors to be from Lambeth Council and Brixton Green. A phased approach to governance is planned, allowing a soft landing for the Trust, a truly community owned body; at a point when a certain proportion of flats are let, there will be a transition period where directors are appointed from the community, new residents and occupiers.

Construction is due to start later this year with completion of the homes during 2017–19.

6 hours ago 🏡Are you solving a #housing problem? We're looking for practical, innovative & sustainable solutions to housing c… https://t.co/2dIXOOZL02

6 hours ago RT @yiorgos_pap: Can we learn from your solutions to the #housing challenges we face? Apply by Sunday 12 March 2023. #AffordableHousing #E…

6 hours ago RT @homelessimpact: Our implementation guide created with @NICEComms provides tools and resources that may be useful to commissioners and…