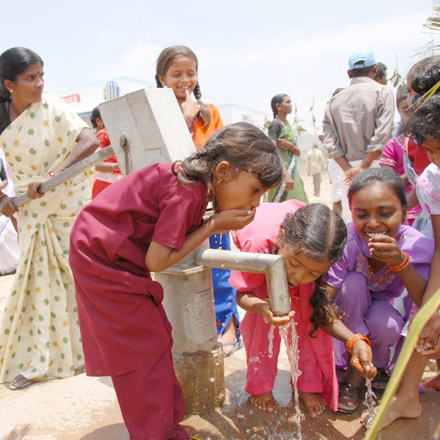 A programme led by the Rural Development Trust in India which helps the most vulnerable women to establish and fulfil their right to land and housing has been named a finalist in this year’s World Habitat Awards.

Empowering marginalised women through home ownership supports women in rural Andhra Pradesh to gain the deeds to land and housing in their names, so they can escape poverty and raise their social status.

Once they formally own the land, people take part in building their own homes. They are also encouraged to take more of an active role in their community, as every village sets up a committee to oversee the building work taking place there. At least half of all committee members must be female, which improves gender equality and social inclusion. Since the programme began in 1996, land and homes have been provided for over 60,000 households.

Chittakka, who has a disability caused by a neurological disorder and lives with her husband who is also physically disabled, said:

“My parents are agricultural labourers and are very poor. I got married when I was eighteen years old and stayed living with my parents until after the birth of our children. It became difficult to accommodate us all in their small house so they built us a small hut next door. I was physically unable to work and my husband earned only a small amount for us to run the household. We lived in the hut for many years but it was not very safe, especially in the rainy season.”

“My life took a different turn when I joined a self-help group for disabled people organised by the Rural Development Trust. I was recommended to their housing programme since our hut was collapsing. My brother and some members of our group helped with clearing the site, digging foundations and watering the plastered walls. Our house provides us with security all year round and we now have a permanent asset for the future.”

David Ireland, Director of World Habitat, funders and co-ordinators of the World Habitat Awards, said: “This is an inspiring story of transformation in some of the poorest communities. The project reaches distant rural areas which are sometimes cut off from opportunities, offering life-saving results for thousands of people.”

5 hours ago RT @SuchiComments: @TheJagaMission - an idea - turned into - sustainable & replicable model - paved an answer to urban challenge like slum…

12 hours ago 🏡Are you solving a #housing problem? We're looking for practical, innovative & sustainable solutions to housing c… https://t.co/2dIXOOZL02

12 hours ago RT @yiorgos_pap: Can we learn from your solutions to the #housing challenges we face? Apply by Sunday 12 March 2023. #AffordableHousing #E…