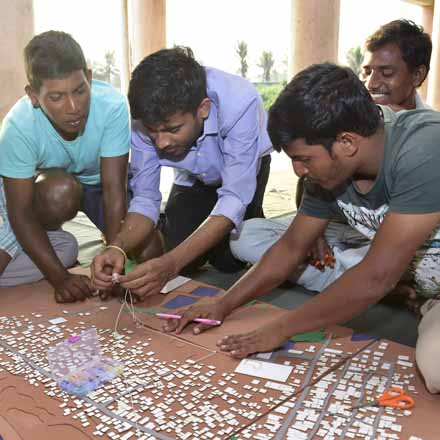 A government initiative granting land rights for tens of thousands of slum dwellers in the east Indian state of Odisha has today been named a Bronze Award Winner in this year’s World Habitat Awards.

The Odisha Liveable Habitat Mission (OLHM) maps and surveys slums, bringing together the use of pioneering technology and community participation. It then uses this information to assign land rights to eligible residents – and upgrades the physical infrastructure with roads, drains, street-lights, sanitation and clean-water supplies.

More than 50,000 families have been granted land rights under new legislation – The Land Rights to Slum Dwellers Act – which was passed by the Odisha government in 2017 as the first step in its pioneering programme to raise living standards in the state’s 2,919 slums.

Once implemented state-wide, the project will have issued land rights to 206,000 families, benefitting 1 million people. Affordable housing complexes built on government land will benefit a further 0.8 million people. The target for completion is 2021-2023.

David Ireland, Chief Executive of World Habitat, said: “At least a billion people live in slums across the world – and the number is growing. This project has recognised that you can’t solve this issue by demolishing homes and forcing people to move. This project has not only established land rights for residents and improved living conditions, but they are doing it at an astonishing scale.”

The World Habitat Awards judging panel said: “There is huge ambition behind this state-led project, which takes a community-centred approach to granting land rights. This is a fantastic initiative, acting as a superb example to the rest of the country of what can be done. The extreme speed of their progress, backed up by legislation, is very impressive.”