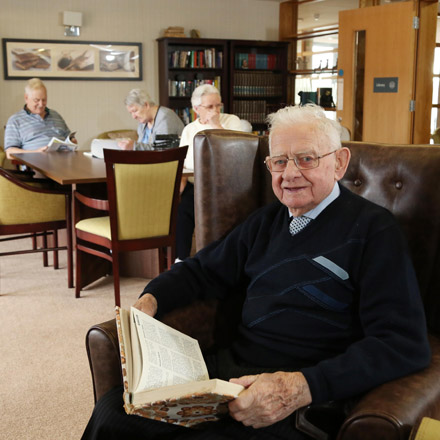 A purpose-built supported housing development for people with dementia and cognitive impairment in Northern Ireland has been named as one of the finalists of this year’s World Habitat Awards.

Hemsworth Court provides 24-hour care with dementia-friendly facilities which help people avoid potential confusion and distress. Residents are supported to live independently within their community in Lower Shankhill in Belfast – a deprived area affected for many years by civil unrest – which has become the first dementia-friendly community in the city.

Awareness of dementia in the local community has increased through their wider work with charities, faith groups, schools and local businesses. This means that local people understand and interact more with residents and many take part in social events.

Claire Lemon, who has lived at Hemsworth Court for the past three years following a diagnosis of vascular dementia and early Alzheimer’s, said:

“When I came to live at Hemsworth Court, I could hardly walk. I suffered hair loss from pulling at and playing with my hair continually. My memory was going and I felt there was nothing to be done. That all changed from the moment I crossed over the door at Hemsworth. From that first day it was all about exercising my brain and my body. I got involved in many things – things that I had never done in my life!”

“The accommodation is brilliant, I can come and go as I please and there is room for my family to visit and stay over if they want. I feel safe, secure and can relax here. I close the door and I know – and my family know – I’m safe. Living at Hemsworth has changed my life – even the tests at the memory clinic show that my memory has improved.”

David Ireland, Director of World Habitat, funders and co-ordinators of the World Habitat Awards, said: “Dementia is becoming a worldwide health problem. Hemsworth Court shows how dementia-friendly housing can make a difference to people, making them feel safe and even helping reverse some of the symptoms.”