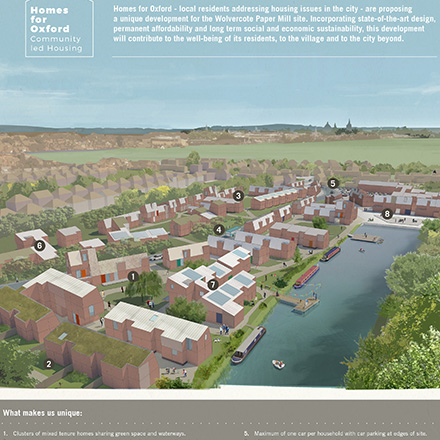 Oxford house prices now peak at an eye-watering sixteen times the average income of its population, and 40,000 people who can’t afford to live there commute into the city every day. Now a coalition of community-led housing groups have joined forces and have plans, which would be the first of their kind in the UK, to address the severe affordable housing shortage in exciting and creative ways.

On 25 May, in competition with national developers, Homes for Oxford submitted their groundbreaking, innovative and commercially competitive proposal for a new world-class housing development on the Oxford University-owned site of Wolvercote Paper Mill.

Fifty per cent or more of the new homes would be made permanently affordable by adopting a land trust model to separate the land value from the homes, making them affordable for most people through rent or equity share, and by putting in place cooperative leasing to ensure there is no right to buy in the long term. The development will thereby remain as a mix of owner occupied and rented homes.

Local resident Stephen Lunn said, “The proposed development would mean that our despair that our children would never be able to afford to live here would turn to hope, and would provide unique opportunities for engagement with the village community. We’re confident that a successful Homes for Oxford bid would lead to far better outcomes for the village than any other possibility.”

The group’s plan, prepared with Bioregional, who have the BedZED (London) and One Brighton sustainable living developments in their portfolio, and which has secured the moral and financial support of local villagers in Wolvercote, also includes a number of long-term social, environmental and economic benefits for residents and the city.

Deborah Glass Woodin, of Homes for Oxford, said, “This is an historic opportunity for the University to do something unprecedented in the country and get a good price for a piece of land whilst supporting a community-led housing project that offers ecological sustainability and co-operative living, with permanent affordability at its heart. Together we can address some of the challenging problems of our time with innovative housing solutions.”

“There is huge support, both from the local community and across Oxford, for an alternative to the standard housing development where houses are priced beyond the reach of people that live and work in the city.”

Outline planning permission was granted in December 2015 for a development including up to 190 new homes, a community centre, GP surgery, office buildings and a lagoon. The development proposed by Homes for Oxford will also include clusters of zero carbon homes on pedestrianised streets, a reduced car ratio of one per household or less, enabled through car-sharing schemes, and a frequent bus service to and within the site.

Homes for Oxford are hoping their proposal will be selected for the next round of the bidding process, with interviews for those shortlisted scheduled for 7 June.

If accepted, this proposal will demonstrate a successful, sustainable model for affordable housing in the city, and elsewhere in the country, that can help to alleviate the strain on Oxford’s housing market and the increasing numbers squeezed out by excessive prices and desperate lack of social housing.