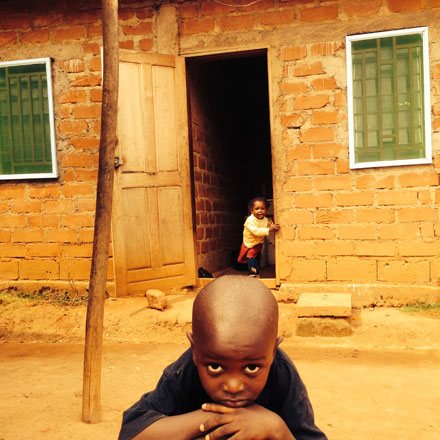 A malaria prevention programme which has reduced the number of mosquitoes entering homes in one of the poorest areas in Cameroon has been named a finalist of this year’s World Habitat Awards.

Simple low-cost improvements that keep mosquitoes out of people’s homes have helped reduce the number of cases of malaria. ARCHIVE Global’s Building Malaria Prevention project helps residents of an informal settlement in Yaoundé to plaster cracks in walls, improve sewerage and drainage, build and fit window and door screens, and grow mosquito repellent plants. Alongside this, malaria awareness campaigns have been introduced in nursery school classes and through radio advertising. It is estimated that the number of mosquitoes has halved in homes helping over 1,300 people.

Ambroisels and Catherine Ngock Zanga, who live with five of their children and three grandchildren in Minkoameyos, said:

“In 2004, we were forced to move back to Minkoameyos because we could no longer afford to live in the city. After 10 years of being empty, we found our old home was crumbling and undermined the health and safety of our family. About every two weeks, we would have a case of malaria in the family and the children had rashes and sores from infected mosquito bites. We had only one good mosquito net in the house, our other one was torn and had holes in it. With holes in the walls of the house and no screens on the windows and doors we had no real barrier against mosquitoes.”

“ARCHIVE Global’s Building Malaria Prevention project helped us get a new roof, new walls, and screens for the windows, doors and eaves.  We now have a home that contributes to our good health, instead of threatening it. Our grandchildren are no longer missing school because they are sick. It means that we can go to work every day, and we no longer have to spend money on expensive drugs or visits to the clinic.”

David Ireland, Director of World Habitat, funders and co-ordinators of the World Habitat Awards, said: “This programme shows how better housing can help keep mosquitoes out and stop so many people catching malaria. It is a simple, easy and cost-effective approach which means people don’t have to use potentially cancer-causing insecticides.”