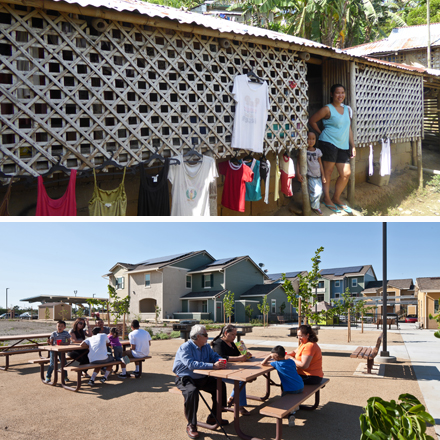 The first certified Zero Net Energy Ready rental housing development in the USA providing year-round housing to agricultural workers in California and a project that helped more than 15,000 families rebuild their homes following Typhoon Haiyan in the Philippines are the winners of this year’s World Habitat Awards.

Each year the World Habitat Awards are presented to two outstanding and innovative housing projects – from over 100 entries from across the world. The judges are particularly keen to award projects and providers that have not only produced outstanding housing solutions but those that can also be copied elsewhere.

Post-Haiyan Self-Recovery Housing Programme, Philippines: after the widespread devastation of Typhoon Haiyan in 2013, this project helped over 15,500 families to self-recover. Instead of relocating families, the project helped people rebuild their housing using locally available materials and debris from destroyed houses. This means fewer families were relocated and they have gained useful skills, as well as enabling people to be reached and helped more quickly.

Mutual Housing at Spring Lake, USA: based in Woodland in Yolo County, California, this project provides year-round housing to agricultural workers. The estimated 6,000+ agricultural workers in the county endure some of the worst housing conditions and most dangerous jobs in the country. Mutual Housing worked with families to provide secure affordable homes which was also the first certified 100% Zero Net Energy Ready rental housing development in the USA, meaning utility bills are extremely low.

Alongside the winners are eight finalists including two who received a special mention from the judges:

Building Malaria Prevention, Cameroon
Reducing the number of malaria-carrying mosquitoes entering homes with simple adaptations in one of the poorest informal urban settlements in the country.

From Disaster to Dignity, El Salvador
Rebuilding the community after years of civil unrest and two successive earthquakes with a savings and credit cooperative run by and for women.

Empowering marginalised women through home ownership, India
Helping the most vulnerable women in rural communities to establish and fulfil their right to land and housing with self-build homes.

Düzce Hope Homes, Turkey
Extending the right to housing to all those affected by major earthquakes through community-led activism and campaigning.

David Ireland, Director of World Habitat, funders and co-ordinators of the World Habitat Awards, said: “Billions of people across the world still lack a safe home. These remarkable projects show that it doesn’t have to be like that. Brilliant people and brilliant ideas have come together to show that people on low-incomes can live safely, free from the fear of disease, natural disasters and insecurity.”

Full details can be found at www.worldhabitatawards.org.

The World Habitat Awards established in 1985 are the world’s leading housing awards. They are run with support from UN-Habitat.  The two winners receive £10,000 and international peer exchange activities to inspire, showcase and transfer world beating ideas.

4 hours ago RT @CoHabitatNet: ✨#CommunityLedHousing in the spotlight✨After a training workshop with community architects in Thailand, look what this sl…